New Delhi: Left parties have joined the chorus to attack Prime Minister Narendra Modi and the BJP government at the Centre over the move to rename Ahmedabad’s Motera Stadium as Narendra Modi Stadium.

President Ram Nath Kovind had on Wednesday declared the refurbished stadium as open ahead of the third Test match between India and England. Union Home Minister Amit Shah on the occasion announced that the world’s largest cricket stadium, located inside the Sardar Vallabhbhai Patel Sports Enclave – which also houses an Olympic size swimming pool, squash arena, badminton and tennis courts amongst other sporting facilities – will now be known as Narendra Modi Stadium.

While the Opposition yesterday hit out at the government over the renaming of the stadium after a sitting PM, several leaders including Congress MP Rahul Gandhi also took a jibe over two ends of the stadium being named after two corporate groups.

Rahul repeated his ‘Hum Do, Hamare Do’ jibe, which he has been directing against PM Modi, Shah and industrialists Mukesh Ambani (Reliance) and Gautam Adani (Adani group).

Communist Party of India (Marxist) leader Sitaram Yechury on Thursday took a jibe over the naming of the two bowling ends after the two corporate groups.

Yechury, however, did not just took a political jibe but used the ‘Pawri’ social media trend to hit out at the government. 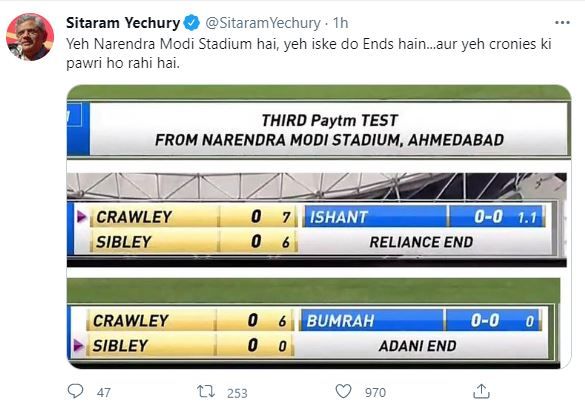 Amid the controversy, the Gujarat government has also clarified that the stadium, which was known as Motera Stadium, has only been named after the PM. The broader complex, named after the country’s first deputy prime minister and home minister Sardar Vallabhbhai Patel, continues to be renamed after him.

“We are building a sports complex on a 233-acre land and have named it as Sardar Patel Sports Complex. Only the cricket stadium has been named as Narendra Modi Stadium. So, the Congress has no right to criticise,” Gujarat Chief Minister Vijay Rupani said yesterday.

“They (Congress) should go in past and see what they have done for Sardar Patel. As a matter of fact, Congress gets upset merely with the name of Narendra Modi,” he added.