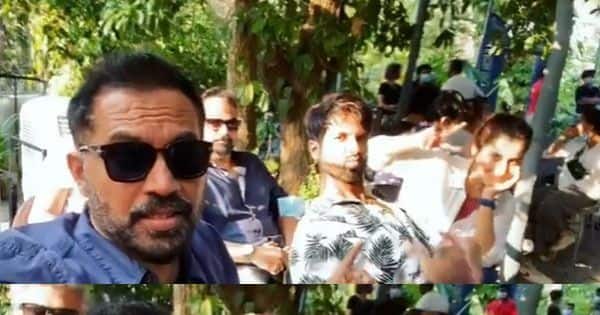 Shahid Kapoor does a fun Pawri Ho Rahi Hai version with the team of Sunny in Goa and it is too good to miss.

Actor Shahid Kapoor is in Goa the past few weeks, shooting for his first ever digital outing with director duo Raj & DK (Raj Nidimoru and Krishna D.K.). The actor will be paired opposite Raashi Khanna in this action web series. But it is not all work and no play for the crew. In fact, with the latest video that Shahid has shared on his social media, we are sure that the crew is having a lot of fun on the set. On Thursday morning, they all got together and took a break from shooting to do their own take on the much popular and viral trend Pawri Ho Rahi Hai. What is interesting is that Shahid and team gave this trend an Akshay Kumar twist. Interestingly, Shahid’s Jersey and Akshay Kumar’s Prithviraj are set to be clashing at the box office on Diwali as they release on the same date, November 5, 2021. But with this video it seems like Shahid is not really perturbed by the fact that his film will not be a solo release. Well, for the audience, it just gets better. Now, getting back to the video, watch it and it will surely put you in the weekend mode. Also Read – Sushant Singh Rajput suicide: Hansal Mehta says nepotism debate should be broadened, asks industry to showcase talent and not gym looks