By Paddy Dinham For Mailonline

The leader of Britain First has been slammed after posting a video that he falsely claimed was of Muslims celebrating last night’s Paris terror attack.

Paul Golding tweeted a video this afternoon along with the caption ‘Oh look, a crowd of ‘moderate’ Muslims celebrating the Paris terror attack in London.’

Mr Golding was swiftly met by a tirade of people who were up in arms about the tweet, with many believing he was trying to stir up Islamophobia.

Scroll down for video. 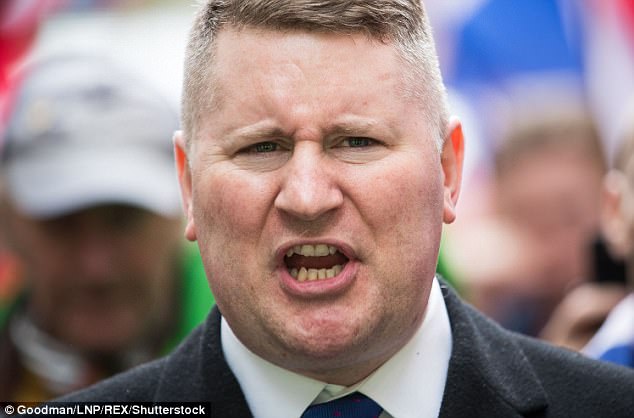 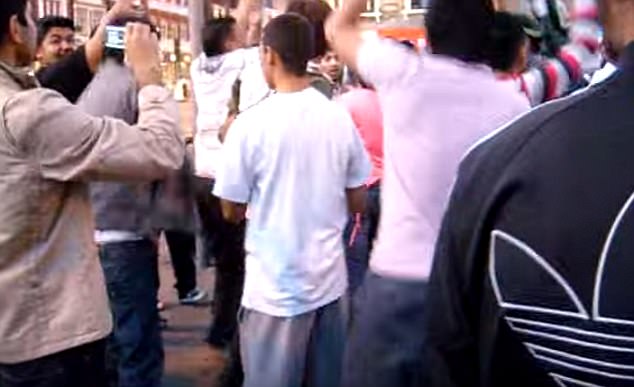 This video was uploaded by Britain First leader Paul Golding, who claimed it was of Muslims celebrating the Paris terror attacks 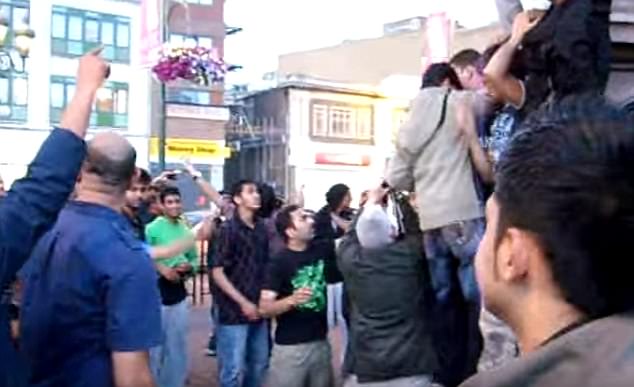 However, it was actually Pakistani cricket fans celebrating a 2009 victory over Sri Lanka 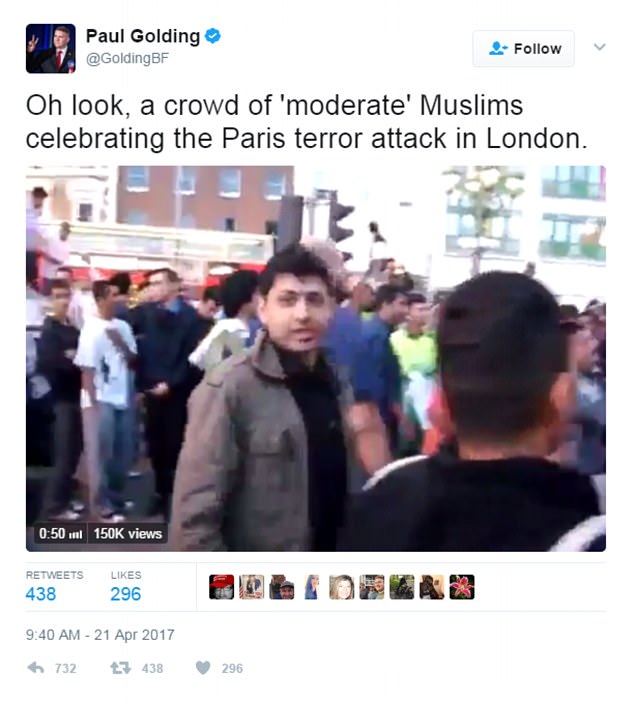 Paul Golding tweeted the video this afternoon along with the caption ‘Oh look, a crowd of ‘moderate’ Muslims celebrating the Paris terror attack in London’

Above is the 2009 video that Paul Golding claimed was of Muslims celebrating the Paris terror attacks.

It was, in fact, shot seven years ago and actually shows Pakistani cricket fans celebrating a victory of Sri Lanka.

It comes after Karim Cheurfi, 39, drove his silver Audi on to the Champs Elysee, the most famous street in the French capital, and ‘targeted’ officers using a Kalashnikov on Thursday night.

He killed 37-year-old policeman Xavier Jugele as he sat in a patrol van at a red light and hit another police officer in the chest, but he survived because he was wearing a bulletproof vest.

And scores of social media users were furious at Mr Golding over the tweet, believing he was trying to stir up Islamophobia.

One said: ‘Paris isn’t mention, no radicalised flags. Are you sure this isn’t a cricket celebration? English passers-by are even being embraced?’

Another added: ‘How you know that’s what they’re celebrating? There was a non Muslim woman in the crowd too. Have you taken this out of context?’ 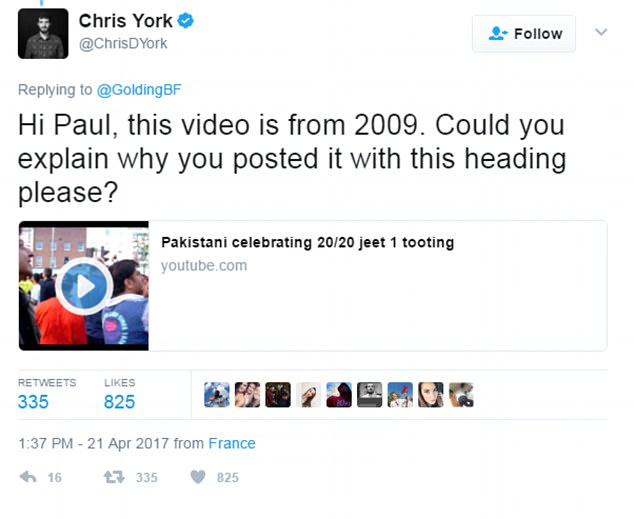 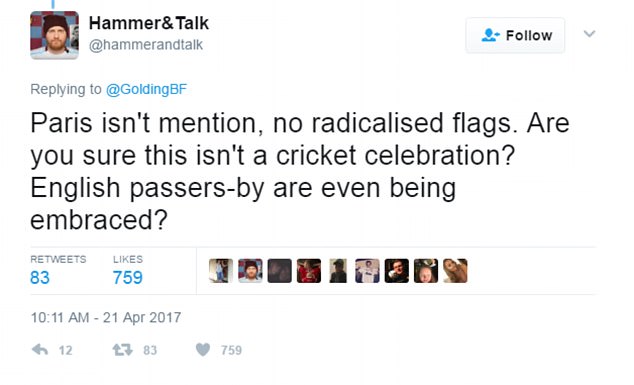 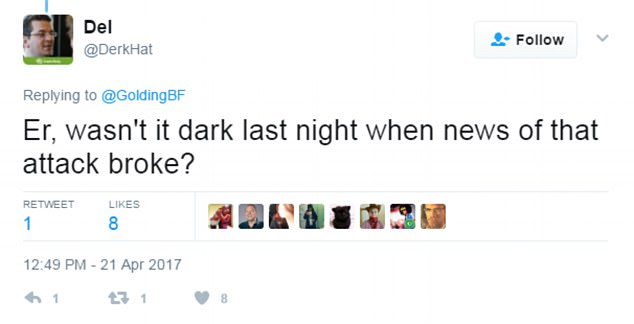 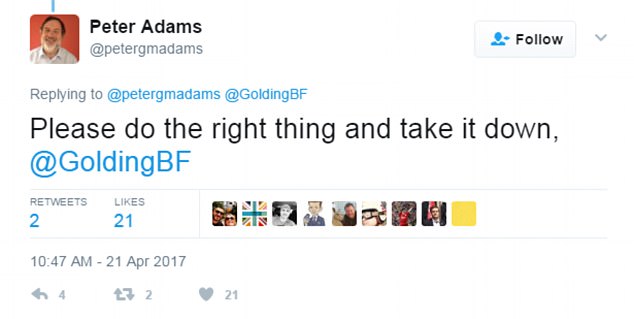 Last year, controversial Mr Golding infamously turned his back on Sadiq Khan as he gave his victory speech after being elected London’s first Muslim mayor – but claimed he was not being racist.

Mr Golding, who was stood alongside the other candidates inside City Hall, was filmed gazing out the window as Mr Khan urged Londoners to come together.

Speaking at the time, he said:  ‘Racist? I didn’t turn my back around because he’s Asian, I turned my back on his because he’s a vile man.

‘The extreme left lunatic fringe of Labour have taken over with Corbyn.’

Then, in December, he was jailed for eight weeks for breaching a court order not to enter a mosque or encourage others to do so. 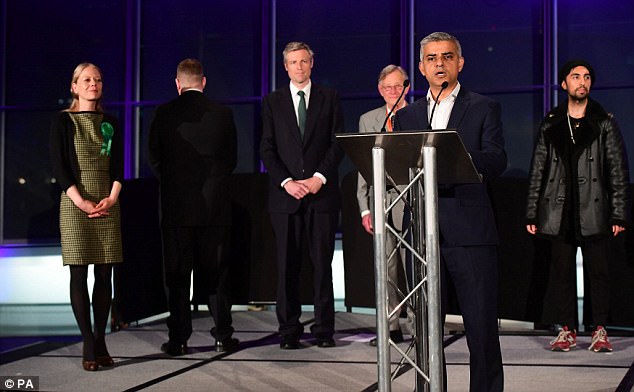 Last year, controversial Mr Golding infamously turned his back on Sadiq Khan as he gave his victory speech after being elected London’s first Muslim mayor, having run for the position himself

London’s High Court heard that nine days after the injunction – which prohibited entering any mosque in England and Wales without prior invitation – was imposed in August this year, Golding drove four Britain First members to the Al-Manar Centre in Cardiff for a ‘mosque invasion’.

Golding stayed outside and despite there being no violence, there was a verbal confrontation between his four colleagues and a mosque trustee.

Mr Golding has been approached for comment by MailOnline.