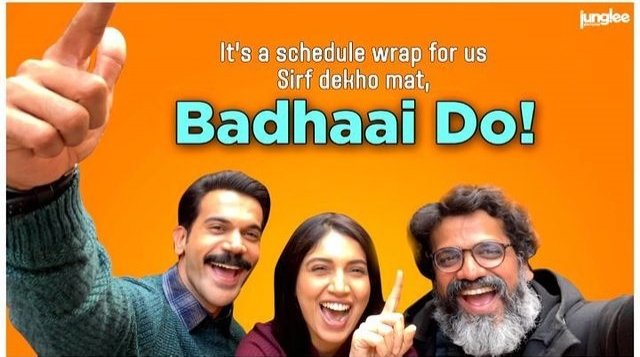 February 25 : Actor Bhumi Pednekar along with Rajkummar Rao and the entire team of Badhaai Do announced the schedule wrap of her upcoming film by joining the ‘Pawri Ho Rahi Hai’ meme trend.

Bhhumi took to her social media and dropped a video from the sets of the film and announced the schedule wrap for ‘Badhaai Do’ with a hilarious short video. She captioned the video, “Where’s the pawri tonight? On #BadhaaiDo sets! Schedule wrap hua hai. Badhaaiyaan toh banti hai na phir! #pawrihorahihai @jungleepictures @rajkummar_rao #HarshavardhanKulkarni #AkshatGhildial @sumadhikary”

In the video, Bhumi can be seen on the sets of the movie along with co-star Rajkummar Rao, the film’s director Harshavardhan Kulkarni, and the rest of the crew.

In the film, Rajkummar plays the role of a cop and Bhumi will be seen playing a PT teacher with big dreams in the film.

Bhumi Pednekar, who saw the release of her film Dolly Kitty Aur Woh Chamakte Sitare during the lockdown, was last seen in Durgavati.

Rajkummar Rao is currently promoting his first outing with Janhvi Kapoor, the film is titled Roohi.