A couple of weeks ago, a Pakistani content creator and influencer Dananeer Mobeen took social media by storm following an epic video of her warped English accent. Her phrase from the video — “Pawri ho Rahi hai” — took over the internet in no time. Celebrities could not keep themselves aloof from the latest social media trend, as memes began doing the rounds. Similarly, Premier League heavyweights Manchester City’s Instagram account decided to get along with the trend to highlight their impeccable winning streak across competitions.

Following their close-edged victory against Arsenal over the weekend, Man City extended their winning streak to 18 games across all competitions. Raheem Sterling put his side in the front in as early as the 2nd minute as he headed home a splendid cross from Riyad Mahrez. 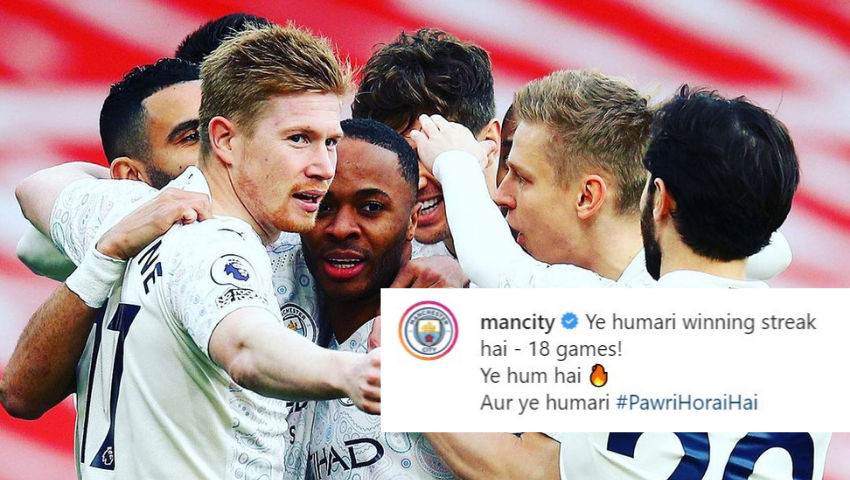 Man City decided to make the most of the ‘Pawri ho rahi hai’ trend to highlight their phenomenal form this season. The Man City Instagram account was flooded with epic reactions when the club posted a picture of the team. What gauged the attention of the fan base was the post’s caption. The caption read, “Ye humari winning streak hai – 18 games! Ye hum hai ð¥ Aur ye humari #PawriHoraiHai.”

Man City are just among a thousand others to have joined the recent social media trend. The Pawri ho rahi hai trend came to the fore when a young woman named Dananeer from Pakistan posted a video on social media. In the video, she is seen along with her friends having a party on a road.

Her accent in the video has gone viral, as she goes on to say, Yeh humari car hai, Yeh hum hain, aur yeh humari pawri ho rahi hai (This is our car, this is us, and this is our party). Her pronunciation of the word ‘party’ has sparked a meme fest on social media, while also impacting a further surge in Dananeer’s popularity.

Man City further strengthened their hold at the top of the Premier League standings following the victory against Arsenal. With 25 games already played, Pep Guardiola’s men have racked up 59 points, which is 10 more than second-placed Manchester United. They will next play Borussia Monchengladbach in the Champions League on Wednesday (Thursday according to IST).