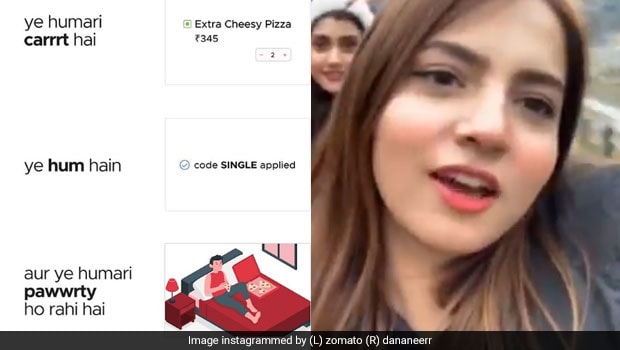 Viral meme format of ‘Pawri ho rahi hai’ is a hit with brands.

The year 2021 has seen a flurry of viral meme trends ever since the year began. Memes this year started with the ‘Screaming Pasta’ meme format which went viral on social media after a two-eyed Macaroni picture surprised the internet. Next, we saw the trend of vaccine memes after India started the largest vaccination drive in the world. “Put the vaccine in..” suggested various netizens with popular foods of various Indian cities. And come February, another meme trend called ‘Pawri Ho Rahi Hai’ has been taking the internet by storm. It all started with famous musician Yashraj Mukhate’s video on Instagram, which featured a hilarious song made with a video shot by Pakistani influencer Dananeer. Take a look:

“Pawri ho rahi hai,” was the catchphrase of the foot-tapping music created by Mukhate, which soon took social media by storm. The funny way of pronouncing the word ‘Party’ was a hit with users who gave their own spin to the meme. Netizens donned their thinking caps and brought out the best of their creativity with memes that made the internet laugh and cringe at the same time. Here are some:

Brands too joined in the fun, sharing interesting and share-worthy memes on the ‘Pawri ho rahi hai’ trend. Food delivery apps Swiggy and Zomato shared funny and relatable memes in the viral meme format, as did popular pizza chain Dominos and burger giant McDonald’s. Chaayos too tried their hands at the meme format. Take a look at their posts here:

Others such as Netflix and Oyo Rooms too hopped onto the viral meme trend. The trend of ‘Pawri ho rahi hai’ memes soon spilt over to the global audience as well, as Adrian Sina of popular band ‘Akcent’ too shared a hilarious video of himself saying the catchphrase.

The meme surely has been spreading like wildfire on the internet. Which ‘Pawri ho rahi hai’ meme did you find the funniest? Tell us in the comments below!

About Aditi AhujaAditi loves talking to and meeting like-minded foodies (especially the kind who like veg momos). Plus points if you get her bad jokes and sitcom references, or if you recommend a new place to eat at.