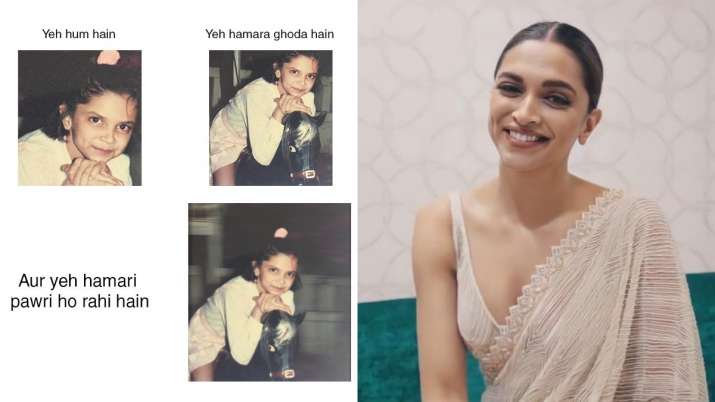 When the whole world is in a party mood or we should say ‘pawri’ mood, how can our Bollywood celebrities stay behind. On Thursday Bollywood actress Deepika Padukone took to her Instagram and shared her version of ‘pawri ho rhi hai’ trend. Deepika shared a photo collage with her adorable childhood pictures. Sharing the fun post, she wrote: “Who made this?” The picture showed a collage of Deepika’s three childhood pictures – the first one is a closeup of her, which had written on it “yeh hum hain”, the second one showed the same picture which is zoomed out and Deepika is sitting on a wooden horse. It had a text that read “yeh hamara ghoda hain” and third picture with text that read, “aur hamari pawri ho rahi hain”.

Deepika’s fans and followers seem to love her post as they showered it with comments. They dropped heart and smiling emojis.

The meme got viral in India after Mumbai-based music composer Yashraj Mukhate shared a funny rap video on the same and wrote, “Aajse me party nahi karunga Sirf pawri karunga. Kyuki party karneme wo mazaa nahi jo pawri karneme hai (from today I will not party, I will pawri, there is more fun in pawri than a party)”.

The internet is taken over by storm with this viral trend. Earlier, actor Randeep Hooda also boarded the train to this ‘meme.’ The actor who is currently shooting for Inspector Avinash, took to his social media handles to share his hilarious take on the ‘Pawri’ song.

On the professional front, Ranveer and Deepika will be seen together in Kabir Khan’s sports drama 83, in which he will play former cricketer Kapil Dev, while she will play his wife Romi. She will also feature in Shakun Batra’s next. The yet-to-be-titled film also stars Ananya Panday and Siddhant Chaturvedi in lead roles. Apart from this, she will also be seen opposite Hrithik Roshan in Siddharth Anand’s next film Fighter. It will release on September 30, 2022. She also has the tentatively titled Prabhas 21 in her kitty. The sci-fi flick is directed by Nag Ashwin of Mahanati fame. It stars Prabhas in the lead role.