Yashraj Mukhate’s ‘Pawri Ho Rahi Hai’ video has taken the internet by a storm. The popular YouTuber gave a musical twist to Pakistani blogger Dananeer Mobeen’s clip and created a hilarious rap for the netizens. The video went viral on social media in no time, resulting in numerous memes and jokes. Bollywood actress Deepika Padukone couldn’t resist herself from joining the ‘Pawri Ho Rahi Hai’ bandwagon.

The ‘Chhapaak’ actress shared a meme using the last lines of ‘Pawri’ girl Dananeer’s video on her official Instagram handle. The leggy lass shared a collage of her childhood picture wherein she can be seen sitting on wooden horse. The caption for the post read, “Who made this? Fans have flooded the comments section with their messages. Check out the meme!

One of the fans commented on Deepika’s post and revealed that she created the meme. Kudos to her. 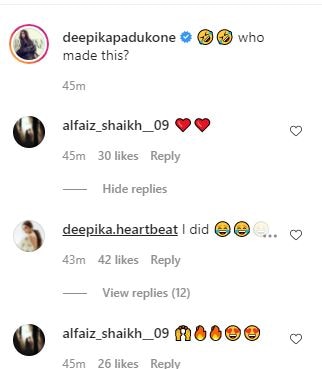 Earlier in the day, Shahid Kapoor shared a rib-tickling video with Raj and DK on his Instagram handle. The ‘Kabir Singh’ actor, keeping with the ‘Pawri’ trend, re-created the popular meme along with the director duo of Raj-DK. Kapoor added an ‘Akshay Kumar’ twist in their video as he sang ‘Party All Night’, leaving the cast and crew in splits.

The ‘Padmaavat’ actor posted the video along with the caption, “#fakers faking feku …. better words were never said.”

The ‘Pawri’ girl commented on Shahid Kapoor’s video. She wrote, “OMG! AM I DREAMING.” 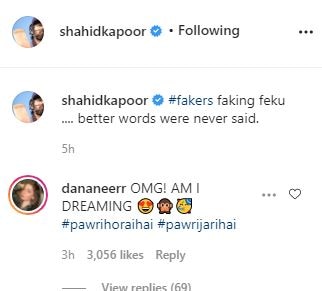 On the professional front, Shahid Kapoor will be next seen in ‘Jersey’. The sports drama co-starring Mrunal Thakur will hit the silver screens on November 5, 2021. It will clash with Akshay Kumar starrer ‘Prithviraj’ at the box office.

The ‘Haider’ star is currently busy shooting for his upcoming project with Raj and DK. The web series will mark his debut in the digital space.

‘PawriHoRahiHai’: Things To Know About Pak Blogger Dananeer Whose Video Has Sparked A Meme Fest

Talking about Deepika Padukone, the tinsel town diva will be next seen in Kabir Khan’s ‘83’. She is playing Ranveer Singh’s on-screen wife in the film, which is based on India’s 1983 Cricket World Cup Victory.

DP also has Shakun Batra’s next, ‘Fighter’ and Ashwin Nag’s upcoming film with Prabhas in her kitty.

Watch this space for more updates!