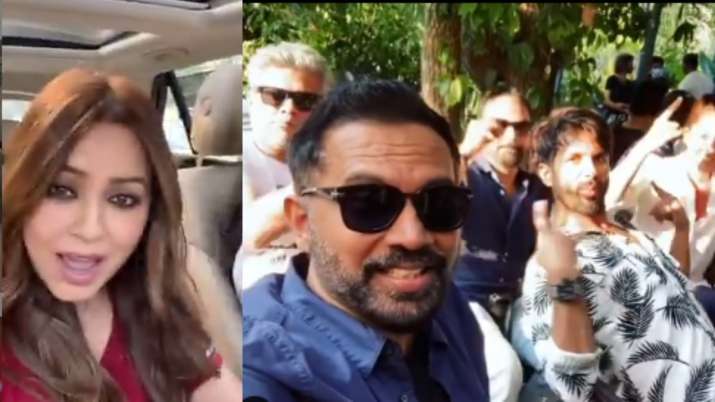 Party is on guys, oh sorry ‘Pawri’! Bollywood actor Shahid Kapoor on Thursday gave his fans a glimpse of his fun side when he posted a video along with directors Raj and Dk, doing their own version of Yashraj Mukhate’s viral Pawri mash-up. The actor took to Instagram and shared his unique version of ‘pawri ho rhi hai’ trend. Shahid, who is currently shooting for Raj and Dk’s untitled digital series, uploaded the video that has DK saying”Ye mere stars hai aur ye humari pawri ho rahi hai.’

On the other hand, actress Mahima Chaudhry too boarded the train of this meme fest and posted a video in her car while having ‘Pawri.’ In the video, the actress said, ‘yeh humari car hai, yeh hum hain aur yeh humari car hai.’

The Pawri mash-up was yet another fun composition by Mumbai-based music composer Yashraj Mukhate, who rose to fame with the ‘Rasode mein kaun tha’ mash up last year. The meme got viral in India after Yashraj shared a funny rap video on the same and wrote, “Aajse me party nahi karunga Sirf pawri karunga. Kyuki party karneme wo mazaa nahi jo pawri karneme hai “.

Meanwhile, on the professional front, Shahid, who had started his acting career with romantic movies, has been taking up intense roles in the past years. Lately, he has starred in movies like ‘Haider’, ‘Udta Punjab’, ‘Rangoon’, and others, which highlighted his versatility as an actor.

He will be next seen in the remake of the sports film ‘Jersey’. The 39-year-old star will be seen essaying the role of a cricket player in the movie. He had recently wrapped up shooting for it. It also features actors Mrunal Thakur and Pankaj Kapur, among others. He is also set to star in filmmakers Raj and DK’s upcoming OTT project which will also feature actor Raashi Khanna.