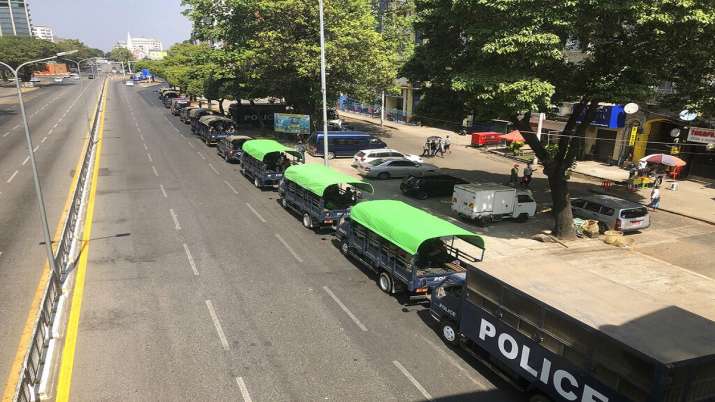 Police trucks are parked at Kyauktada police station in Yangon, Myanmar Monday, Feb. 1, 2021. Myanmar military television said Monday that the military was taking control of the country for one year, while reports said many of the country’s senior politicians including Aung San Suu Kyi had been detained.

The Myanmar military staged a coup on Monday and seized control of the country after detaining de facto leader Aung San Suu Kyi and other top leaders of her National League for Democracy (NLD) party, following escalated tensions between the government and the army that erupted due to results of the November 2020 polls.

In a new development, The Irrawaddy (newspaper published from Yangon — capital of Yangon region and largest city in Myanmar) reported that Myanmar military would hold a new election as soon as it completes implementing emergency provisions. Myanmar’s Military mouthpiece Myawaddy TV informed on Monday.

Myanmar’s commander-in-chief has also announced that the military would hand power whosoever will emerge victorious in the election.

Meanwhile now, the state power will now be handed over to Commander-in-Chief of Defence Services Min Aung Hlaing because of “election fraud”, according to a declaration signed by First Vice President U Myint Swe, who is currently serving as the Acting President.

According to the declaration, which was first announced on the military-owned Myawady TV, state of emergency has been declared in the South Asian country for a period of one year.

“The President shall declare the transferring of legislative, executive and judicial powers of the Union to the Commander-in-Chief of the Defence Services to enable him to carry out necessary measures to speedily restore its original situation in the Union,” the Section 418 (a) of the Constitution said.

The legislative functions of all Parliaments and leading bodies will be suspended from the day of the declaration, it added.

Regarding the detentions, Myo Nyunt, spokesperson of the NLD, told Xinhuak, “I received internal reports about our State Counsellor and President (U Win Myint) being taken by the military. As far as I was informed, Shan State’s Planning and Finance Minister U Soe Nyunt Lwin, Kayah state’s NLD chairman Thaung Htay and some NLD representatives of the Ayeyarwady region’s Parliament have been detained.”

(With inputs from IANS)

5 thoughts on “Myanmar coup: Military says will hold elections as soon as possible”