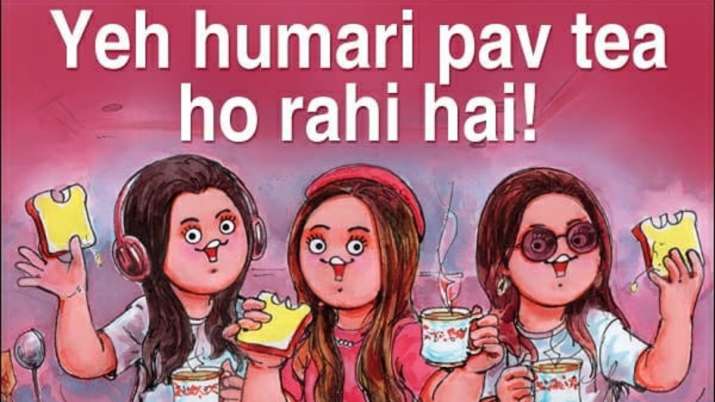 Dairy brand Amul India on Thursday joined the trending ‘Pawri Hori Hai’ meme fest and shared their own version of the viral clip that has raked in millions of likes over social media. Amul took to Twitter and shared its new cartoon featuring Pakistani influencer and content creator Dananeer Mobeen. Earlier last week, Mobeen went viral on social media after she posted a video in which she could be seen vacationing in a hilly location. In her 15-second video, she could be heard saying, “Ye humari car hai aur yeh hum hai aur ye humari pawry ho rahi hai (this is our car, this is us, and this is our party).”

The doodle features Mobeen along with her two friends as they sip on tea while gorging on butter smeared bread slices, enjoying their breakfast ‘pawri’. The creative doodle also features a loaf of bread and a brick of butter with the trio binging on some ‘pav tea’. Amul gave the ‘Pawri Hori Hai’ trend a quirky twist by naming the cartoon as “Yeh humari pav tea ho rahi hai.” and an additional text on it reading, “Amul always trending!” “#Amul Topical: Video sparks social media trend!,” tweeted Amul with the cartoon.

Amul is known for its creative and quirky cartoon posters on films and actors. The brand never disappoints and usually comes up with topical doodles on film releases, celebrity weddings, and other significant events.

The viral video by Mobeen that took social media by storm, inspired music composer Yashraj Mukhate to make a new composition on the ‘pawri anthem’. As soon as the new composition was posted on Mukhate’s Instagram account, users started to comment and there were the likes of Bollywood celebrities including Sidhant Chaturvedi, Archana Puran Singh, and Fatima Sana Shaikh, who gave their approval to this “pawri anthem”.

Several other users took to Twitter to approve of Mukhate’s new “pawri anthem” and memes started to flock in. Dananeer creates content on a range of topics including the latest make-up and fashion trends. She also speaks on mental health issues plaguing the youth of Pakistan. While the footage has been recreated hundreds of times with #pawrihoraihai on Twitter, the video has over a million views on Dananeer’s official Instagram handle alone. Meanwhile, Yashraj has earlier composed several iconic tracks like ‘Rasode mein kaun tha,’ ‘Biggini shoot’ and ‘Tuadda Kutta Tommy.’