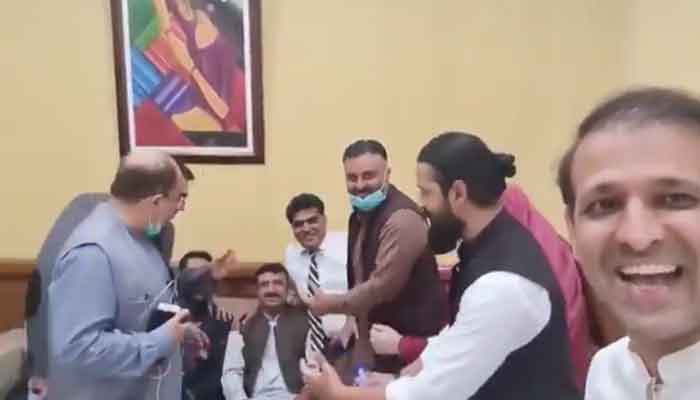 The video was to mock the PPP, which according to the PTI, had kidnapped Gabol and attempted to coerce him into voting against the PTI in the Senate polls.

“This is me, these are our MPAs and this is — Karim bhai,” Qureshi says as Gabol emerges from behind the other MPAs and they all shout with joy.

A day earlier, Gabol could be seen running frantically outside the Sindh Assembly, with PTI MPA Khurram Sher Zaman and Raja Azhar get into a car and drive away from the assembly.

The PTI has alleged that the Sindh government had kidnapped Gabol and coerced him to secure his vote in the Senate elections, adding that the party’s MPAs had ‘recovered’ him.

A few days ago, Gabol had lashed out at the party leadership in a video statement, criticising the Senate election candidates from Sindh nominated by the party.

“We are hearing things about some [PTI] candidates who got the [Senate] tickets. We are hearing that they received the tickets after paying money for it,” the MPA can be heard saying in the video, adding that he would never vote for such candidates.

Gabol says in the video that he was always a member of the PTI and would continue to remain so. However, the lawmaker had said he would vote only for the candidate that seems satisfactory to him.

Reacting to his statement, PTI MPA Khurram Sher Zaman had said that the Sindh government had kidnapped three MPAs of the party to pressurise them into changing their loyalties for the Senate polls.