YouTuber and music creator Yashraj Mukhate, who broke the internet with Kokilaben rap, again hit the list of trends in India on Friday. This time, the music creator gave a twist to a viral video of a Pakistani girl, who was heard saying, “Pawri ho rahi hai”. The first half of Mukhate’s video featured the original video’s snip while in the second half he added catchy music and lyrics to give a good laugh to the viewers.

While sharing the Pawri ho rahi hai song, Yashraj wrote, “Aajse me party nahi karunga sirf pawri karunga. Kyuki party karneme wo mazaa nahi jo pawri karneme hai” (From today, I won’t party, but pawri, because there is more fun in pawring than partying). In his brief caption, he thanked his fans, who shared the viral video with him. Also, he gave a shout out to Dananeer, the girl featured in the video. Scroll down to watch the video.

Within a few hours, the video managed to garner an overwhelming response on the photo-video-sharing platform. So far, the video has bagged 3M+ views with over 15k comments. From Bollywood celebs to popular social media influencers, many showered praises on Mukhate. Social media Influencer Kusha Kapila quipped, “Petition to change party to PAWRI. Let’s make it happen” while Gully Boy fame Siddhant Chaturvedi wrote, “You and I ….it’s a Pawriiiiiiiiii!”.

Meanwhile, RJ Abhinav made a meme out of it and wrote, “Ye mai hoon. Ye mere doggy ka paw hai. Aur yahan Pawri hori hai”. Bollywood actor Fatima Sana Shaikh and Aparshakti Khurrana, among many others, also laughed out loud in the comments section. While an Instagram user called it “finest crossover” of 2021, another asserted that the song is the “party anthem” of 2021. Popular Pakistani VJ Waqar Zaka, too, took to the comments section and lauded Yash. On the other hand, a section of fans gave a special mention to Yash’s “chamach” remark in the video. Laughing emoticons were a common sight in the post’s comments box. 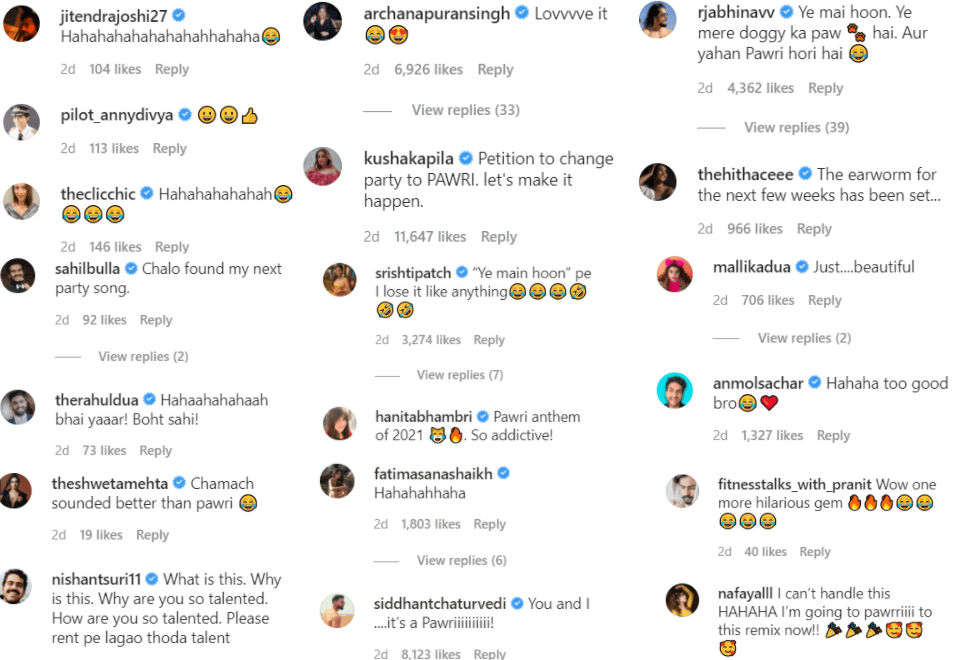 Interestingly, a Pakistani influencer had shared the video on her Instagram page on February 6. She wrote a funny caption for her video post, which read, “No one: / When borgors visit northern areas: yeh hamari pawri horai haai”. She had also written that the video is a gold content and a “10/10 meme material”.