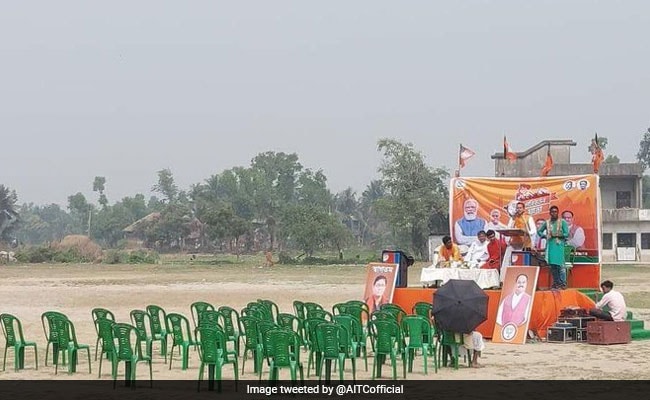 The Trinamool mocked the BJP by sharing a photo from a public meeting in Bengal showing empty chairs.

Catchy phrases and songs have found their way into a full-blown social media campaign war on the Internet between the BJP and the Trinamool Congress ahead of the West Bengal assembly elections.

After the Trinamool launched its election slogan “Bangla Nijer Meyekei Chaye“, which translates to “Bengal wants its own daughter”, and pitched Chief Minister Mamata Banerjee in that role, the BJP released a music video on Saturday on the tunes of the popular Italian protest folk song ‘Bella Ciao’, converting it to say “Pishi Jao” which means “Go Away Aunty.”

The Trinamool hit back today by using the viral “Pawri ho rahi hai” trend on Twitter to mock the BJP and shared a photo from a BJP public meeting in Bengal showing empty chairs, with the caption: “Yeh @BJP4Bengal hai. Yeh unki jansabha hai. Aur yahaan inki pawri ho rahi hai! (This is Bengal BJP. This is their public meeting. And they have a party going on.)”

The “Pawri ho rahi hai” trend went viral earlier this month after a Pakistani influencer posted a hilarious video on Instagram following which several people on the Internet started making memes and videos of their own over it, besides political parties using it to reach voters in creative ways.

The Trinamool’s rebuttal came a day after the BJP posted the animated music video taking a leaf out of the Italian Communist song “Bella Ciao” and using Bengali lyrics to ask voters to get rid of current Bengal Chief Minister and Trinamool chief Mamata Banerjee’s rule.

The Bella Ciao song has been adapted several times in the past and has become a protest song against fascist forces across the world.

“A tune from Communist Italy, sung to protest against atrocities, echoes once again in West Bengal as people stand up to the injustices of the ruling dispensation. Our ideologies may differ, but the language of protest always rings true. #BanglaDidirThekeMuktiChay #PishiJao,” the BJP’s official Twitter handles posted along with the video.

A tune from Communist Italy, sung to protest against atrocities, echoes once again in West Bengal as people stand up to the injustices of the ruling dispensation.

Our ideologies may differ, but the language of protest always rings true.#BanglaDidirThekeMuktiChay#PishiJaopic.twitter.com/32KN4395h6

In the song, Ms Banerjee has been accused of corruption, violence, weakening the industry and infrastructure like roads, and failing to create jobs. The BJP talks about several problems faced by the state under her rule, demanding the exit of “Pishi” or aunty – a reference to the charges against her nephew Abhishek Banerjee.

In what is set to be a battle of slogans as much as one of development issues, the Trinamool’s campaign in this election has been about fighting “bohiragato” or “outsiders” while the BJP wants voters to oust Ms Banerjee and is going all out by using its star campaigners.

Elections to the 294-seat West Bengal assembly are due in April-May with the Election Commission expected to announce the poll dates early next month.