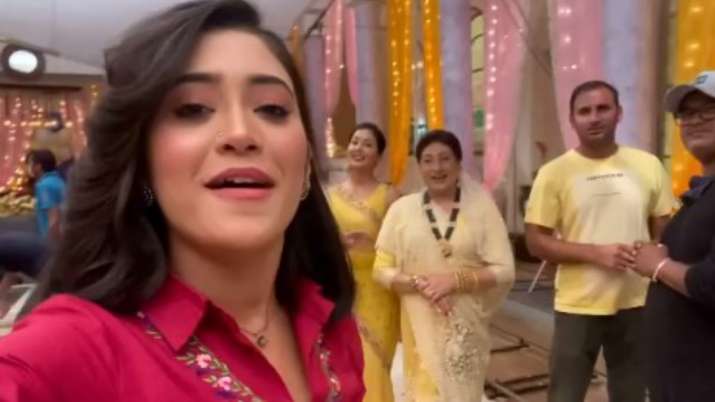 After Pakistani influencer and content creator Dananeer Mobeen’s viral ‘Pawri Hori Hai’ took the internet by storm, many celebrities joined the trend and sharing hilarious posts. After Deepika Padukone, Shahid Kapoor, Randeep Hooda, it’s was time for Yeh Rishta Kya Kehlata’s Naira aka Shivangi Joshi to join the bandwagon. The popular TV actress took to social media to share a funny video from the sets of the daily soap that featured the cast and crew.

In this video, Shivangi Joshi and the team of ‘Yeh Rishta Kya Kehlata Hai’ are seen re-creating Dananeer’s video but with a twist of their own. Joshi in the video says, “Yeh hum hain, yeh hamara set hai aur yeh hamari shoo-ring (shooting) hori hai” with the accent similar to the Pakistani influencer. With the video, Shivangi wrote in the caption – “Yahan hamari shoo-ring ho ri hai..”

Earlier last week, Mobeen went viral on social media after she posted a video in which she could be seen vacationing in a hilly location. In her 15-second video, she could be heard saying, “Ye humari car hai aur yeh hum hai aur ye humari pawry ho rahi hai (this is our car, this is us, and this is our party).”

The viral video by Mobeen also inspired music composer Yashraj Mukhate to make a new composition on the ‘pawri anthem’. As soon as the new composition was posted on Mukhate’s Instagram account, users started to comment and there were the likes of Bollywood celebrities including Sidhant Chaturvedi, Archana Puran Singh, and Fatima Sana Shaikh, who gave their approval to this “pawri anthem”.

On Thursday, Shahid Kapoor and Deepika Padukone also joined the trend with their personalized twists. Giving a twist to ‘Pawri’ video, Shahid Kapoor’s group started singing the track Party all night at the end of the dialogue. The actor’s hilarious dance moves are hard to miss in the video. Posting the clip, the ‘Kabir Singh’ actor wrote, “#fakers faking feku …. better words were never said.”

On the other hand, Deepika shared a photo collage with her adorable childhood pictures. Sharing the fun post, she wrote: “Who made this?” The picture showed a collage of Deepika’s three childhood pictures – the first one is a closeup of her, which had written on it “yeh hum hain”, the second one showed the same picture which is zoomed out and Deepika is sitting on a wooden horse. It had a text that read “yeh hamara ghoda hain” and third picture with text that read, “aur hamari pawri ho rahi hain”.