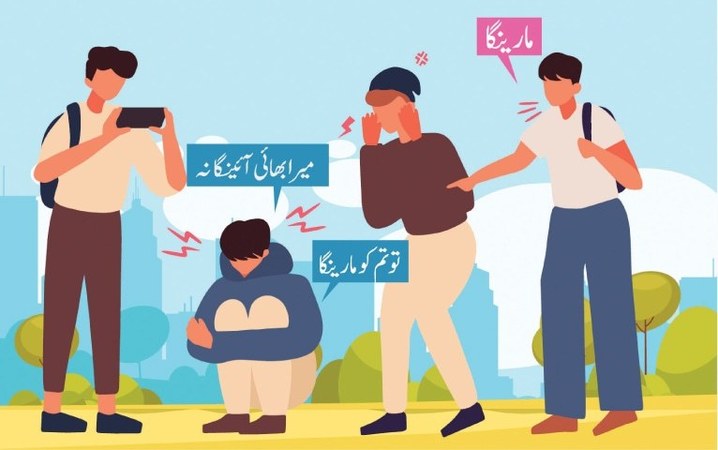 I was a little shocked when my brother asked me a question he had asked a hundred times before. “Aap kaisi hain?” [How are you?]. Why was I shocked? What was so strange about this everyday query?

The problem lay not in the question itself, but in the manner it was asked: “Aap kaisi hain?” You see, my family is Hyderabadi. My father was born in Hyderabad Deccan and spent almost 15 years of his life there, before he came to Pakistan some years after Partition. My mother was not born in Hyderabad, but both her parents were. They spoke in the Hyderabadi dialect and observed the rituals that were a part of Hyderabadi culture.

For those who don’t know, the Hyderabadi dialect is gender neutral in some ways (not always). Many times, you address both men and women in the same manner. Exhibit: before this one time, my brother or anyone else from my family would have said ‘Aap kaise hain’, not ‘Aap kaisi hain’. This is one of the many intricacies of this dialect.

For someone who grew up listening to her family speak Urdu in the Hyderabadi dialect, it is a sobering reflection that the next generations will likely not speak the same dialect at home

Another example is the use of personal pronouns — ‘unon’ and ‘ine’ (unhon ne and inhon ne) — to refer to a person, as in ‘unon ye bolay’ and ‘ine bola tha’. Please note that I’m no linguist and all the examples I’ve quoted here are based on my experience of speaking in, and listening to, the dialect ever since I started speaking.

Coming back to the original issue — of my shock over my brother’s questions — I was surprised because perhaps, up until that point, all our family members spoke to each other in Hyderabadi. Over the years, we have learnt to switch to Urdu when speaking to anyone who isn’t family: friends, teachers, the sabzi wala [vegetable vendor], any person on the street. It is like some automatic mechanism which is activated when we are dealing with any person outside family and we start to speak their language. The habit has become so entrenched over the years that, when we tell people we are Hyderabadi, they are surprised because ‘aap to bilkul sahi Urdu mein baat kar rahi/rahe hain’ [you are speaking perfect Urdu].

However, when our family is together, or any member is talking with another, there is Hyderabadi galore all around — with the exception of my father. Although he is the only family member who has had a real connection with Hyderabad Deccan, we have always heard him speak the most chaste Urdu in our close and extended family. When he was a teenager, some of his friends made fun of yet another trait of Hyderabadi speakers: their inability to pronounce the letter ‘qaaf’ correctly. It is a well-known fact that, for some reason, Hyderabadis pronounce ‘qaaf’ as ‘khaaf’. So when his friends ridiculed him, my father decided he would speak Urdu properly, like the ahle-zabaan [those whose mother tongue it is] do and that’s how he has spoken it ever since.

While he spoke to us and everyone else in proper Urdu, my mother’s was a completely different case. She spoke the Hyderabadi dialect and followed another strange rule most Hyderabadi women did in the past: using the male personal pronoun. I don’t know the origin of this trend, but many women in my family referred to themselves as men when speaking: ‘main gaya tha’ [I went] or ’main ye khareeda’ [I bought this], for instance.

My mother referred to herself in similar fashion until she married my father. He did not like the fact that both he and his wife referred to each other in the same manner. So he made sure that mother quit this habit, which she did. But she couldn’t stop using the Hyderabadi dialect. In my immediate family, she is perhaps the only member who speaks to everyone inside or outside the family in the same way: the Hyderabadi way.

It is almost impossible to say exactly when, why and how we siblings realised that we spoke differently from our friends and classmates and began to speak like them. But I am certain about one thing: nobody from within the family told us to do so. Someone might have just pointed out that we spoke differently, and we may have decided to ‘correct’ ourselves.

I remember one incident distinctly. We lived in an apartment complex and my brothers were quite young. Once they were playing outside and some kids bullied them. Since they were little kids themselves and couldn’t do much, one of them said to the bullying kid, “Mera bhai ayenga na, tou tumko marenga [When my brother comes, he will hit you].”

Instead of feeling scared, the bullies were totally amused. After this exchange, whenever the bullies saw the poor kids, they would repeatedly say “Marenga”. Just this one word.

The rest of us siblings might have faced similar — if not so traumatic — situations that would have taught us to speak properly, like others did. When our youngest sibling was born, we — the relatively mature ones — made it a point to speak to him in Urdu proper. And yet, not only did he learn the Hyderabadi dialect, as everyone except him spoke it at home, but now he also uses it with all of us instead of Urdu.

As we grow older, get married (all of us to non-Hyderabadis so far) and have children, it is becoming a strange mixture. The siblings speak to each other in Hyderabadi, to their spouses in Urdu and to their children in Urdu and English. So in my family, my siblings and I are the last ones who still use the Hyderabadi dialect. This realisation that our next generation will not know Hyderabadi is a sobering, saddening one.

More saddening is the fact that we have become too accustomed to speak in Urdu. Gradually, we might as well speak to each other in Urdu only, instead of switching to our dialect, which we have invariably done thousands of times in the past.

This might be just my experience and there may be Hyderabadi families that still use their dialect outside their close circles. Here’s a shout-out to them: don’t stop speaking it. As for my family, may we also find the courage to not entirely stop using this dialect. Aisa ho jaye tou kitna acha honga [If that were to happen, how great it would be].

The writer is a faculty member at a local university

5 thoughts on “How to speak Hyderabadi”