Rakhi Sawant recalls Sushant Singh Rajput had once told her ‘You are my crush’, watch video

Bigg Boss fame Rakhi Sawant interacted with the paparazzi on Monday (June 14). Considering it’s Sushant Singh Rajput‘s first death anniversary, she recalled her memories of working with the actor and how he had once called her his ‘crush’.
Talking to the camerapersons, Rakhi said, “Sushant Singh, my friend…I still remember the time when we did Zara Nachke Dikha. He had said, ‘Rakhi, you are my crush’. But I didn’t know the meaning of it until I asked from someone.”

The actress shared that he had told her he liked her Paredesiya song while he was in school and joked about them being almost the same age. Recalling her on-set with SSR, Rakhi revealed that he was a ‘jolly person’ and someone who liked to have ‘masti’ on set. 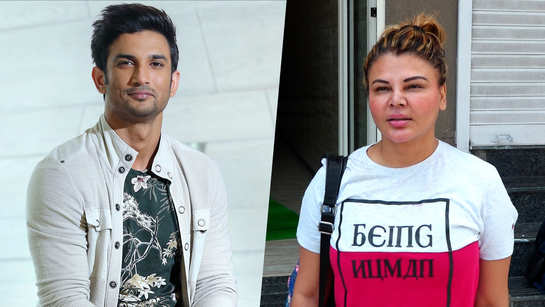 Rakhi said it’s hard to believe he is gone. She is informed by camerapersons that it’s been a year since SSR’s demise, and she shared, “I was thinking today only that if I go tomorrow, will anyone remember me?

The actress concluded her talk by saying that she has prayed for Sushant to God and she hopes he is in a good place.

Sushant Singh Rajput allegedly died by suicide on June 14 at his Mumbai residence. His death came as a shock to everyone in the industry and his fans around the globe. It’s been a year and his closest friends including Ankita Lokhande, Mahesh Shetty, Arjun Bijlani among others are still in mourning.


Rakhi Sawant recalls Sushant Singh Rajput had once told her ‘You are my crush’, watch video

2 thoughts on “Rakhi Sawant recalls Sushant Singh Rajput had once told her ‘You are my crush’, watch video”