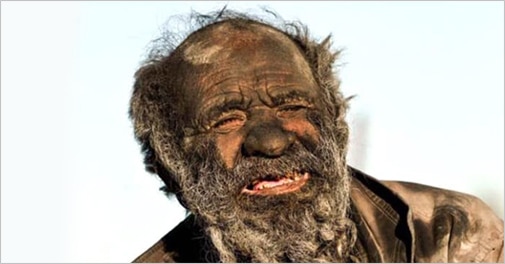 Haji is terrified of water, thus the aversion to bathing. He believes he’ll fall sick if he bathes and this has stopped him from taking a shower in over six decades

Amou Haji, an 83-year-old Iranian is labelled as the world’s dirtiest man as he has not bathed in 65 years. Haji is terrified of water, thus the aversion to bathing. He believes he’ll fall sick if he bathes and this has stopped him from taking a shower in over six decades.

Life in the Iranian desert, with rotting porcupine meat as his favourite meal, is the one that he is accustomed to. He just might give Bear Grylls, the Man V/s Wild presenter, a run for his money.

To stay healthy he drinks five litres of water from a rusty oil can every day. He also loves to smoke but his style of smoking involves inhaling dried cow dung instead of tobacco.

Locals believe that a broken heart was the reason that Amou Haji chose this lifestyle. However, he still hasn’t given up on finding love.

Haji has no home, he wanders near the isolated village of Dejgah in the Southern Iranian province of Fars and lives in holes made in the desert outside the village. Although the villagers built a hut for him but he chose not to live there.

He has become almost the same colour as the earth around him and he totally blends in with his environment. Locals say they often mistake him for a rock when he stays still.

Haji has no care for the comforts of the world and is content living a nomadic life.

Also read: ‘Epicaricacy’: Shashi Tharoor trolls Australia with word of the day; here’s what it means