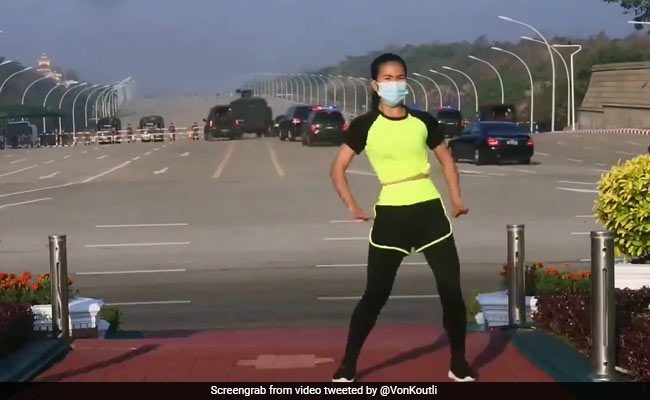 Myanmar: An aerobics instructor was filming her routine as the coup unfolded behind her.

An oblivious aerobics instructor was filming a dance routine in front of the parliament building in Myanmar as the military coup unfolded behind her. In extraordinary footage that has emerged from the capital city of Naypyidaw, the woman was seen completing a workout routine as a convoy of black SUVs sped past behind her to the country’s seat of power. The Guardian identified the woman as Khing Hnin Wai.

Ms Wai did not seem to notice the sirens or the convoy behind her, appearing to be completely engrossed in her dance routine as behind her, people rushed to open the barricade and let the cars through.

Myanmar’s military seized power in a bloodless coup on Monday, detaining democratically elected leader Aung San Suu Kyi and imposing a one-year state of emergency, according to a Reuters report.

Take a look at the footage below:

Khing Hnin Wai’s video has been viewed a staggering 11 million times since it surfaced on Twitter. People on the microblogging platform described it as “surreal” and “insane”.

“If 2021 was a video….. Casually doing your exercise video while a coup unfolds behind you,” remarked one Twitter user.

“This is so bizarre to watch,” said another.

The original footage was shared by Khing Hnin Wai on Facebook. On Tuesday, she posted again to say that the footage was real and that she had been filming exercise videos in front of the parliament for the past 11 months.

3 thoughts on “Viral Video: Aerobics Instructor Dances As Myanmar Coup Unfolds Behind Her”