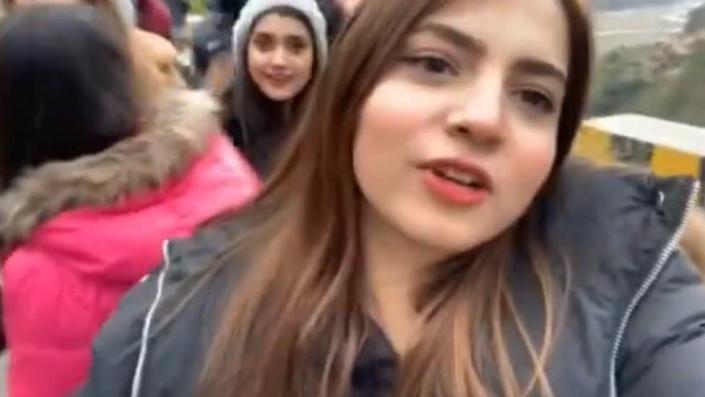 It has been a difficult year yet again – fears of a third Omicron-fuelled Covid wave are rising, just months after a devastating second wave. But there were some social media moments that were celebrated even amid the gloom.

Here are five moments that gave people hope in 2021.

In April and May, a deadly second wave of coronavirus infections swept through India, disrupting the healthcare system. At its peak, on 6 May, India reported 414,000 new infections.

Around that time, this video, shot in a crowded market in Dharamsala town in the northern state of Himachal Pradesh, went viral.

In it, Amit, five years old and barefoot, holding a bottle in one hand and a stick in the other, lightly taps people who aren’t wearing masks and demands that they do so.

The recipients of his attention look startled or amused – one even pats his chin. But local police were impressed – they bought him shoes and snacks, and said they would make him a mascot for coronavirus awareness.

According to reports, locals also promised to help the boy, who sold balloons to help his parents earn a living.

When India and Pakistan ‘pawri’ed together

In February, when Pakistani social media influence Dananeer Mobeen shared a five-second video on Instagram, she had no idea she was about to become a cross-border pop culture star in India and Pakistan.

Ms Mobeen, 19, gestures to a car and her friends as she swings around the camera, saying – “This is our car, this is us, and we are having a party”.

She uses the English word for “party” but pronounces it “pawrty”.

The post’s caption explains that she’s poking fun at “burgers” – a term used by Pakistanis for rich elites who studied or worked outside Pakistan and speak with an American or British accent. Burger here denotes a fancy foreign product, like the expensive food item when it first came to Pakistan, as opposed to the local version, the humble bun kebab.

The video first went viral in Pakistan but India soon joined the “pawri” after an Indian music producer remixed the clip to catchy beats.

It went viral and hundreds of people, from Bollywood stars to Indian soldiers, shared their own versions of the video.

Even brands jumped on the bandwagon and the internet exploded with memes.

In Pakistan, the national cricket board shared a video of the team shooting their own versions after winning a series against South Africa.

The BBC wrote at the time that the video cheered people up in two countries “who are usually at odds on most things because of the decades of sometimes deadly animosity”.

And Ms Mobeen was happy about her role.

“What could be better than sharing love across the border at a time when there is so much trouble and so much division around the world,” she told BBC Urdu.

When India began the world’s largest vaccination drive in January, the first person to receive a jab was a sanitation worker.

Manish Kumar, 34, works at the All India Institute of Medical Sciences in the national capital, Delhi.

“I had a very nice experience. I was not reluctant to get the vaccine shot… people need not be worried,” Mr Kumar told ANI news agency.

The choice was seen as symbolic of India’s intentions to ensure its frontline workers were prioritised during the vaccine drive.

In a televised address that day, Prime Minister Narendra Modi spoke at length about doctors, nurses and other frontline workers “who showed us the light” in “dark times”.

The country’s vaccination drive later ran into hurdles – due to production shortages and glitchy technology, among other factors – but on 16 January, Mr Kumar was a face of hope for the programme as he took the jab among cheers.

It was a historic moment that Indians celebrated.

Chopra became only the second Indian to win an individual gold after Abhinav Bindra in Beijing in 2008.

A video of his best throw at the event went viral, showing Chopra coolly raising his arms in triumph without even checking to see where the javelin had landed.

“It feels unbelievable,” Chopra said. “It’s a proud moment for me and my country.”

Like India’s other medal winners – the country registered its best ever Olympic haul at Tokyo – Chopra returned home to a hero’s welcome.

In April, two young medical students from the southern state of Kerala took time out from their busy schedules to dance to Boney M’s 1978 disco-hit Rasputin, wearing blue scrubs.

The 30-second Instagram reel by Janaki Omkumar and Naveen Razak, shot in the empty corridors of their college, went viral, garnering millions of views.

The duo’s confident moves and Mr Razak’s eyebrow flourish at the end drew plenty of praise.

But the two also came in for some hate after a Facebook post remarked on their different religions – the post also cautioned Ms Omkumar’s parents about Mr Razak as he is Muslim and she is Hindu.

While the two are friends, interfaith couples often face resistance from their families and communities – right-wing Hindu groups even peddle a conspiracy theory alleging that Muslim men seek to make Hindu women fall in love with them with the sole purpose of converting them to Islam.

But Ms Omkumar and Mr Razak received a lot of support – students unions in other colleges invited people to shoot their own versions of the dance, and several medical students shared videos of their own moves.

In one version, friends of Ms Omkumar and Mr Razak danced to the song, with the two joining them at the end – the caption said “if you intend to spread hate, we plan to resist”.