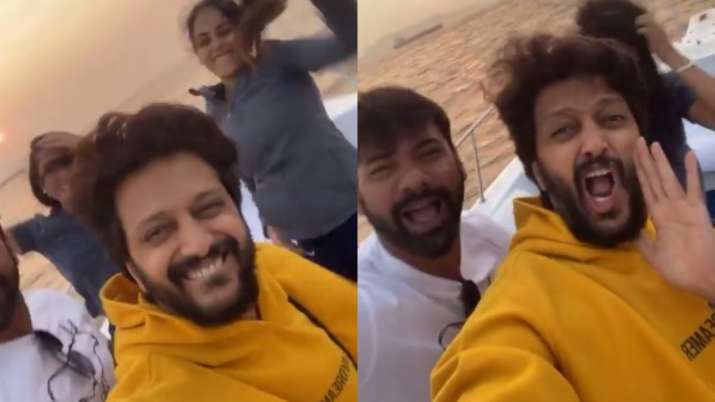 Bollywood actress Genelia Deshmukh on Friday morning treated fans to a cheerful, quirky video clip of a dance on a yacht with husband Riteish and friends. The ‘Jaane Tu Ya Jane Na’ star hopped on to Instagram and posted the video which featured the husband-wife duo along with their friends as they groove to ‘Jaago Subah Ho Gayi’ from 1997 action drama ‘Ghoonghat.’

The video features Riteish as he lip syncs to the lyrics of the song, while Genelia along with Shabbir Ahluwalia and his wife Kanchi Kaul dance to the beats. In the video, the couples seem to be enjoying their time on the yacht. The backdrop – a shinning sun, cloudy sky and the deep blue sea.

The post garnered more than 36 thousand likes with many fans joining in the fun in the comments section. Scores of fans left fire and red heart emoticons. Of late, Genelia and Riteish have been treating fans with fun-filled clips with their friends.

Last month, the ‘Ek Villain’ star shared a sneak peek of how he kicked off the weekend along with his bunch of pals and treated his fans to a rib-tickling video.

Genelia and Riteish married in 2012. The two had their first child, a son named Riaan in November 2014. Their second son, Rahyl, was born in June 2016