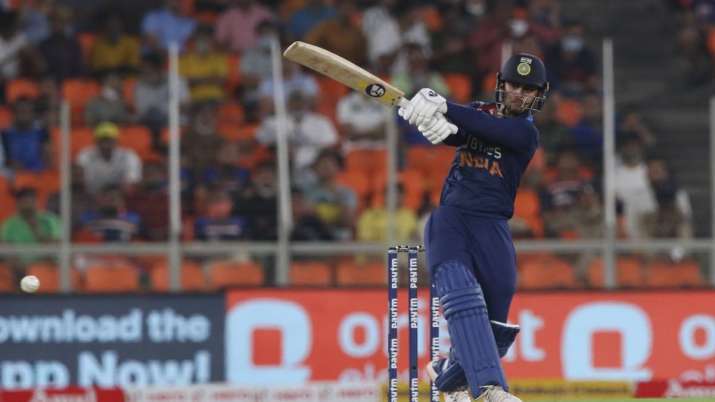 Young Ishan Kishan became the second Indian player to score a T20 half-century on debut as he scored a vital 32-ball 56 in the second T20 International against England on Friday. Ajinkya Rahane, who had scored 61 against England at Old Trafford back in 2011, was previously the only Indian in the list.

Included in the Playing XI in place of veteran Shikhar Dhawan, Ishan, with his aggressive strokeplay at the Narendra Modi Stadium, hit 5 fours and 4 maximums. While KL Rahul departed on a duck in the very first over, 22-year-old Ishan stuck in the middle as he stitched a 94-run stand with skipper Virat Kohli.

Ishan received his maiden India cap along with Suryakumar Yadav as the Mumbai Indians duo was included in the Playing XI in the second T20I of the five-match series.

“Ishan Kishan is going to open for us. Suryakumar Yadav also makes his debut, comes in for Axar Patel. These guys are ready, they’ve done so well in the IPL against world-class bowlers already,” skipper Kohli said at the toss.

After playing an absolute blinder on debut, Ishan was eventually trapped by Adil Rashid in the 10th over. The southpaw reviewed his dismissal after a chat with Kohli but replays went in favour of the on-field call.

Earlier, England were restricted to 164/6 as Indian bowlers efficiently altered their pace on the Motera wicket. A 63-run second-wicket partnership between Jason Roy (46 off 35 balls) and Dawid Malan (24 off 23 balls) helped the visitors get back on track.

However, the England batting unit was able to gather just 35 runs in the last five overs. Shardul Thakur and Washington Sundar took two wickets each whereas Bhuvneshwar Kumar and Yuzvendra Chahal took a wicket each.