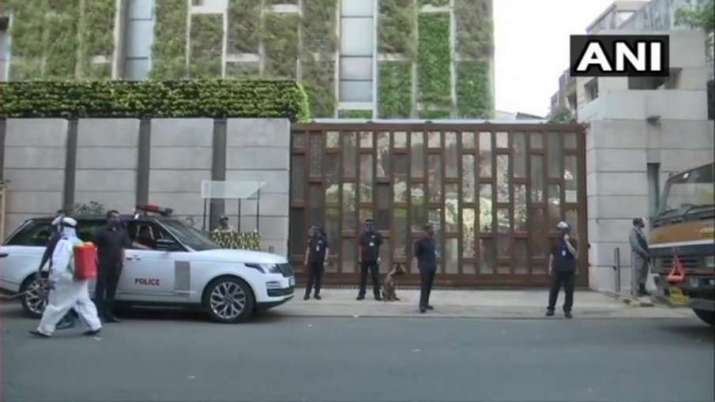 A green colour Scorpio SUV laden with as many as 20 gelatin sticks was found abandoned near Mukesh Ambani’s multi-storey home Antilia on February 25.

In a fresh revelation in the Antilia bomb scare case, investigations have revealed that the Telegram channel through which Jaish-Ul-Hind had claimed the responsibility for the explosives-laden SUV parked near Mukesh Ambani’s house was created inside Delhi’s Tihar jail.

According to intelligence sources, agencies probing the case have come across evidence suggesting that the mobile number which was used to create the Telegram channel was being used inside the Tihar jail.

Jaish-Ul-Hind, however, had later claimed that it was not involved in the case which is now being probed by the National Investigation Agency (NIA).

A green colour Scorpio SUV laden with as many as 20 gelatin sticks was found abandoned near Mukesh Ambani’s multi-storey Antilia on February 25.

A threat letter was also found inside the vehicle warning the Ambanis that it was just a ‘trailer’.

“To Nita bhabhi and Mukesh bhaiya, this is just a trailer. All preparations have been done…picture abhi baaki hai,” the purported letter stated. The bag from which the letter was found had ‘Mumbai Indians’ written on it.

The Scorpio had a fake number plate that matched with the registration numbers of Ambani’s cavalcade, sources said.

Days after the letter surfaced, the Mumbai Police shared a message issued by Jaish-ul-Hind, which claims itself to be a terror group, that it was never released any such threat letter.

A banner released by the group stated that it had nothing to do with Mukesh Ambani. “No threat to Ambani from Jaish ul Hind,” the banner’s title said.

“We condemn Indian Intelligence agencies for morphing and making a fake poster on the behest of Jaish ul Hind,” the banner stated.