Anita Hassanandani Gives A Glimpse Of Her Son, Aaravv’s Unique Universe-Themed Bedding As He Sleeps

Anita Hassanandani was blessed with a baby boy, Aaravv Reddy on February 9, 2021, who had instilled the feeling of motherhood in her for the first time. To announce the arrival of their baby boy, Rohit Reddy had posted a picture from their pregnancy photoshoot, in which Anita Hassanandani had flaunted her baby bump as he had planted a kiss on her cheek. With ‘it’s a boy’ written on a blue kiddie dress on the picture, Rohit had captioned it as “Oh Boy!” Since then, the star parents are doing everything in their capacity for their baby boy and Anita has been sharing how she is giving a unique and personalised touch to her son’s belongings. (Also Read: Madhuri Dixit Shares A Picture With Son, Arin When He Was A Few Months Old On His 18th Birthday)

On March 9, 2021, Aaravv Reddy had turned one-month-old and his mommy, Anita Hassanandani had given a glimpse of his one-month birthday celebration. On Aaravv’s official IG handle, which is managed by his parents, a video of his one-month birthday was posted. In the video, we could see baby Aaravv lying in his cot, wearing a yellow t-shirt and blue dungaree, moving around as if he was dancing. Besides him, we could see blue and white balloons, a foil balloon of the moon and ‘AARAVV’ and a big baby boy balloon. Along with the video, we could hear the ‘Pawri ho rahi hai’ song and the cutesy video was captioned as “And today I’m a month old.”

Now, on Aaravv’s IG handle, we found a cutesy video posted by Anita with her son and it was his bedding that caught our attention. In the video, we can see Anita recording a video with her son, Aaravv, who was sleeping in his bed and as someone had called the actress, she had enacted with ‘sshhh’ keeping one finger on her lips. While the video was adorable, we were stunned by the gorgeous universe-themed bedding of Aaravv. In his cot, we can see blue bedding with stars printed over it. We can also see ‘AARAVV’ and a ship engraved on his bedding. The video is captioned as “This happens everyday Mummy n her” followed by a selfie emoticon.

When Aaravv had turned one-month-old, his mommy, Anita had decorated their house to celebrate this milestone of her child’s life. Amidst the decorations, Anita had decided to pose with her baby boy, Aaravv and had happily flaunted the weight she has gained post-pregnancy. Taking to her IG stories, Anita had posted a picture of herself, flaunting a few extra kilos on her body in a beautiful pink and green floral dress. In another picture, she had posed holding her baby boy, Aaravv in her arms, looking at him with love. Sharing the picture with Aaravv, Anita had written, “To find an outfit that makes you feel good in the extra kilos” atop it. (Must Read: Smriti Irani Celebrates 20th Anniversary With Hubby Zubin, BFF, Ekta Kapoor Shares Their Young Photo) 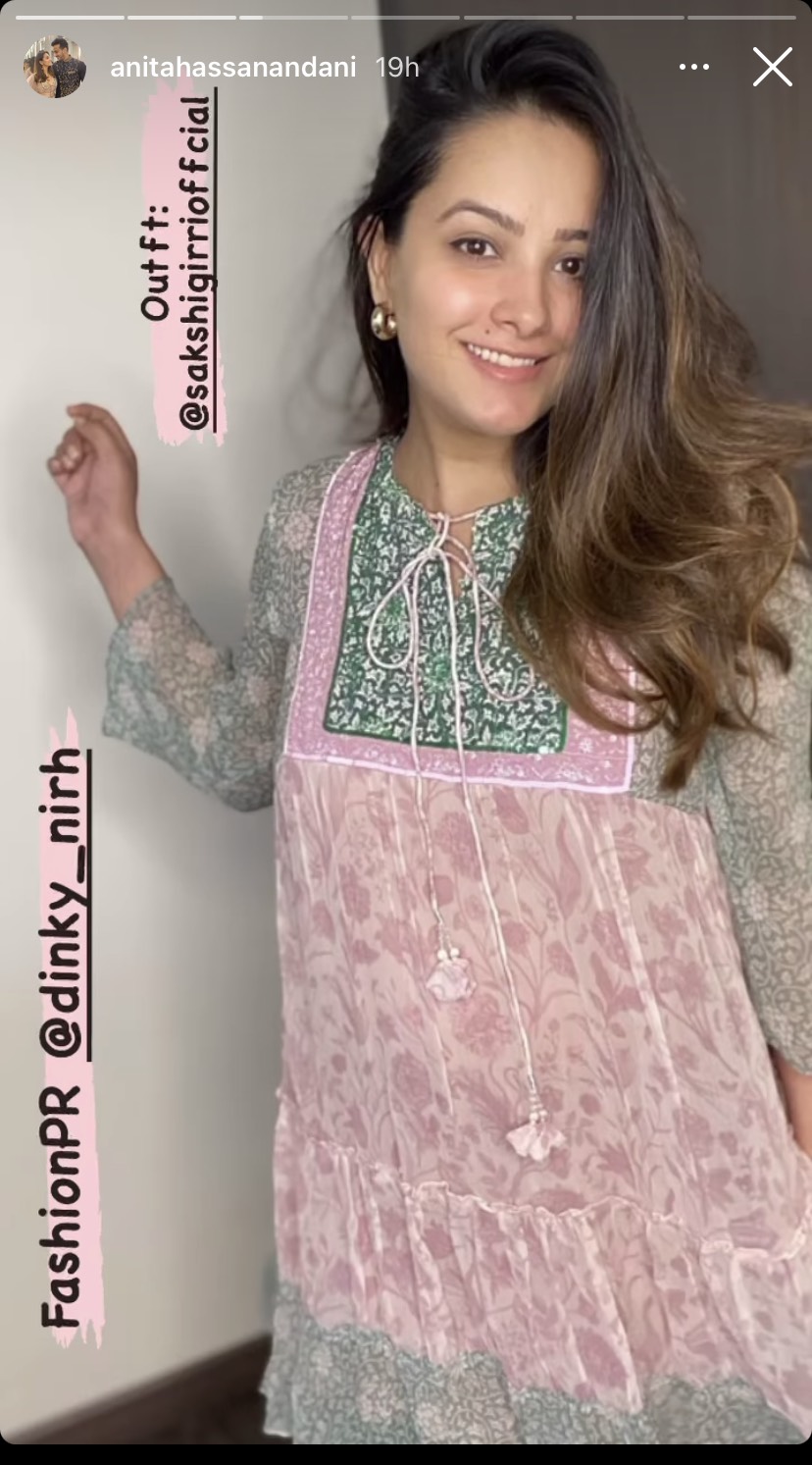 It was on February 21, 2021, when Anita Hassanandani and Rohit Reddy had introduced us to their newborn son and had officially announced his name on social media. In the video montage, the first frame had Anita with a large bomb painted on her baby bump and as the bomb had exploded, the dhamaka had introduced us to their newborn son, Aaravv Reddy, who was peacefully sleeping in his mother’s arms. While Anita had captioned her post as “And our baby AARAVV has arrived 9/02/2021”, Rohit had written, “AARAVV has arrived! #firstglance”.

A few days back, before Aarav’s birth, Anita had shared a collage with two pictures and one video of her baby’s room on her IG handle. The room had oozed out the vibes of peace and happiness that a child brings into the lives of his or her parents. With a white cupboard and a white cradle covered with a white net near a balcony, we were in love with the vibe of the room. Sharing the glimpses, Anita had written, “@cradaleandmaa Thanks for perfection” and “Almost #ReadyRedyy #goosebumps” atop it. (Don’t Miss: Natasa Stankovic Shares A Memory Of Agastya With His ‘Dada Ji’ On His Two-Month Death Anniversary) We loved how Anita has created unique and personalised bedding for her son, Aaravv!


Anita Hassanandani Gives A Glimpse Of Her Son, Aaravv’s Unique Universe-Themed Bedding As He Sleeps