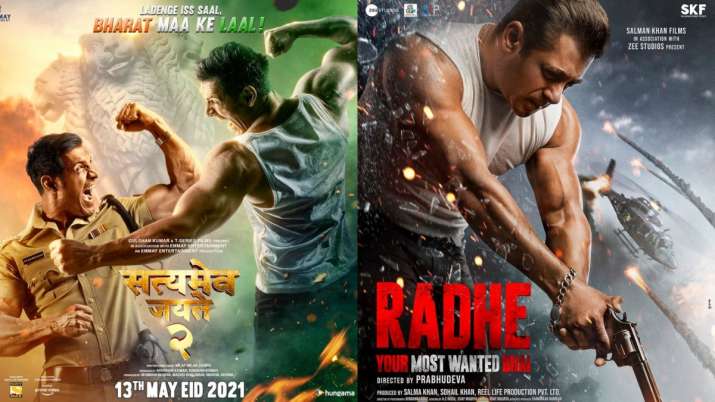 Posters of Satyamev Jayate 2 and Radhe: Your Most Wanted Bhai

Owing to the pandemic, which led to the complete closure of cinemas, 2019 proved to be a dull year for Bollywood with hardly any film getting a theatrical release. Now that cinemas are opening up, the dates are limited and box office clashes are inevitable. In a recent update, actor John Abraham announced the release date of his action drama “Satyameva Jayate 2” which will hit the theaters on Eid, a day early on May 13. The Milap Zaveri-directed film, a sequel to Abraham’s 2018 hit, will be clashing with Salman Khan‘s “Radhe: Your Most Wanted Bhai” which is also scheduled to be released on the same date.

Abraham took to Twitter to shared the film’s new poster and announce the release date. “This Eid, it’s Satya vs Jay, as ladenge iss saal, dono Bharat maa ke laaal (this year, the fight is between two beloved sons of India). #SatyamevaJayate2 releasing on 13th May 2021,” the 48-year-old actor tweeted.

Meanwhile, Khan also confirmed the release date of “Radhe” and announced that he will honour his commitment to release the film on Eid, synonymous with a release featuring the Bollywood superstar.

Salman Khan will play the title role in “Radhe”, int the out-and-out action film. In the recently shared poster, the actor dons a fierce avatar in the poster against the backdrop of a battleground, with burning helicopters and artillery. He flaunts trademark chiselled physique and an intense look. The film also stars Disha Patani, Randeep Hooda and Jackie Shroff in pivotal roles. Radhe is directed by Prabhudheva, who has previously worked the Salman on the film Dabang 3 in 2019 and Wanted in 2009.