The Indian Premier League 2021 commenced on April 9, 2021, at 7.30 PM IST. Hardik Pandya is representing Mumbai Indians in its opening match against Royal Challengers Bangalore. The cricketer posted a picture with his son ahead of the match. In his caption, he described that his son’s laughter was what he needed before the game.

According to his post, the family is currently staying in Taj Fisherman’s Cove Resort & Spa in Chennai for the match. In the adorable picture posted by Hardik, the father and son can be seen spending some quality time. While sitting on the bed, Hardik’s son, Agastya laughed candidly whereas he pointed at him with a huge smile. In his caption, he wrote, “The laughter I need before the game!” Fans and friends couldn’t stop gushing at the cute picture. Take a look at Hardik Pandya’s Instagram post below. Hardik often shares pictures with his son on social media. Earlier, he shared a picture in which he can be seen holding Agastya in his arms. He captioned his post by writing, “Our tiny miracle.” His wife, Natasa Stankovic commented on his post by writing “my boys”. 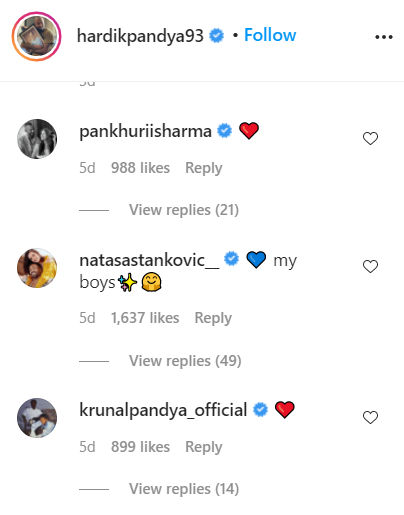 Hardik loves to pose towards the camera with his son. He shared another cute picture as Agastya turned 8 months old. In the caption, he wrote, “Our Agastya turns 8 months. Time flies with him.. big boy.” Take a look at Hardik and Agastya Pandya’s photos below.

More about Hardik Pandya and his wife, Natasa Stankovic –

Hardik Pandya introduced Natasa Stankovic as his girlfriend in 2019 to the world. Natasa is a Serbian artist who made her debut in Bollywood with the film Satyagraha. She also appeared in the Color’s TV’s reality show. She gained popularity by being a part of the popular song DJ Waley Babu.

The two got engaged on a cruise, in the middle of an ongoing party with friends on January 1, 2020. The duo tied the knot during the lockdown in 2020. Hardik announced his marriage to Natasa on May 31, 2020. In May-end, Natasa announced her pregnancy on social media and the couple welcomed their baby on July 30, 2021.