On Sunday, Mamata Banerjee led the Trinamool Congress to a spectacular victory in Bengal Assembly elections. The AITC (All Indian Trinamool Congress) secured 213 seats from a total of 294 and the Bharatiya Janata Party had to settle for 77 at the end of the bitterly contested election. Surprisingly, tHe other parties failed to win any seats.

Mamata Banerjee’s party won a landslide victory in the state but she herself was defeated in Nandigram by the BJP’s Suvendu Adhikari, by a handsome margin. The win means ‘Didi’, as she is fondly called by her supporters and opponents, will be retaining her TMC-led government in the state for a third consecutive term.

Banerjee was seen without a wheelchair for the first time in several weeks. During her victory address, she declared ‘khela shesh (game over)’ and said her party’s focus will be on the COVID pandemic and not celebrations.

Soon after the win, netizens took to Twitter to congratulate her and her party for their convincing victory in the state. Several opposition leaders across party lines and celebrities congratulated Banerjee for her successful campaign.

Amul posted a topical that not only congratulated Banerjee but also highlighted her signature attire. 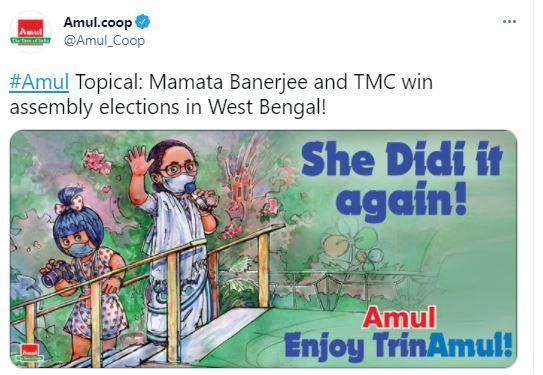 The topical shows the party chief in a white cotton saree and a face mask while she waves at the camera. The Amul girl is standing right next to her with a camera in her hand on what looks like steps leading to a podium.

The topical is topped with the text – ‘She Didi it again!’

Amul’s topicals are perhaps the best in Indian advertising. For decades, they have been producing ad masterpieces that are now considered as a benchmark in creative communication.