Divya Khosla Kumar Stands Beside Pearl V Puri, Reveals The Identity Of The Parents Of The Victim

June 4, 2021, had brought a major shock to the people of the television fraternity and the people of the nation as Pearl V Puri was arrested for the rape case of a 7-year-old girl by the Waliv police. The child’s family had lodged a complaint against him for allegedly molesting and raping her around two years ago when she was 5. The Naagin 3 actor has been in the news since then. Though a lot of celebrities have come out in his support, the Mumbai DCP has stated that they have strong evidence against Pearl.

Recommended Read: Anushka Sharma And Vamika’s Unseen Picture With Danielle And Yente De Villiers Is Too Cute For Words

A few days ago, an audio of the victim’s mother went viral on social media, in which, Ekta Kapoor was heard pleading with the victim’s mother to speak the truth. In the viral audio, the victim’s mother was also heard admitting that Pearl had not done anything wrong. Amid all the support that the actor has got, Divya Khosla Kumar, who had collaborated with him for the song, Teri Ankhon Mein, has extended support to him. 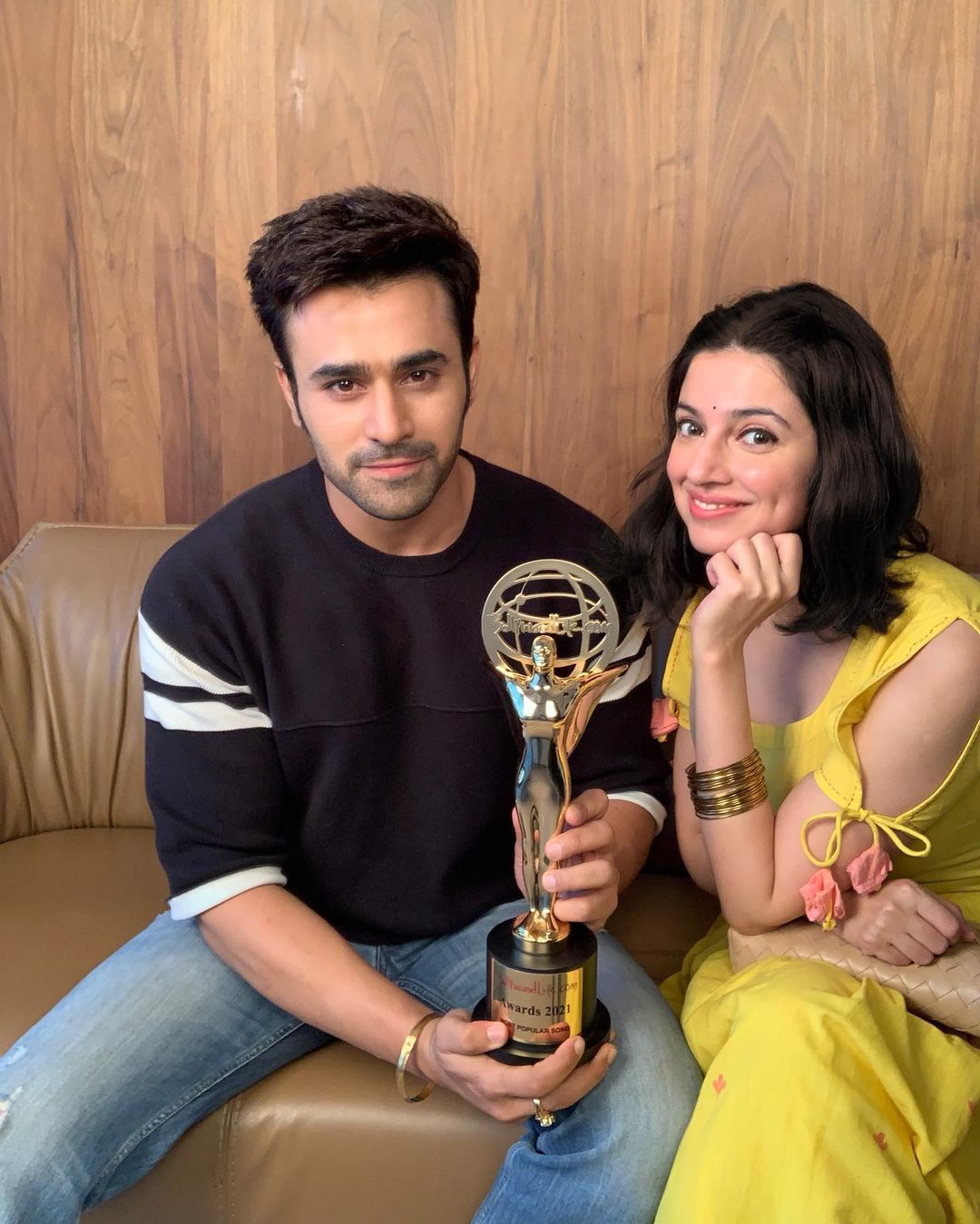 Recently, Divya Khosla Kumar, took to her Instagram account to share the details of the case and also revealed the identity of the parents. She wrote in the post that the man’s name is Anil Donde and his wife, Ekta Sharma used to work on Pearl V Puri’s show, Bepanah Pyaarr. Divya also went forward to say that the child’s father is misusing his daughter to blame his wife, who had taken her on the sets of the show. She also wrote that Anil Donde should be given the Filmfare best screenplay award for this plot. 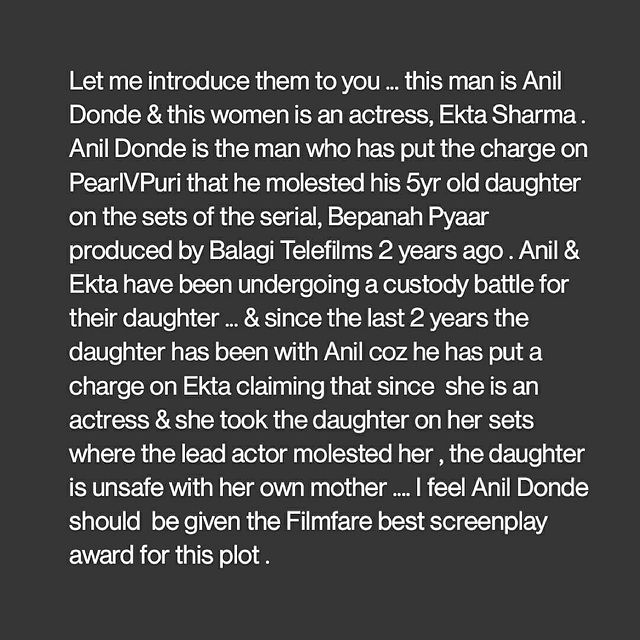 Divya also expressed her disappointment as the police did not take any action for two years as the case was filed in 2019. Though Pearl’s name was nowhere mentioned in the FIR, he is being dragged into the case and in her calls with Ekta Kapoor, the child’s mother has shared that her husband is a psychotic person, who has mentally and physically abused her. Ekta Sharma, the child’s mother, also cleared that Pearl is innocent and had done nothing on the sets. 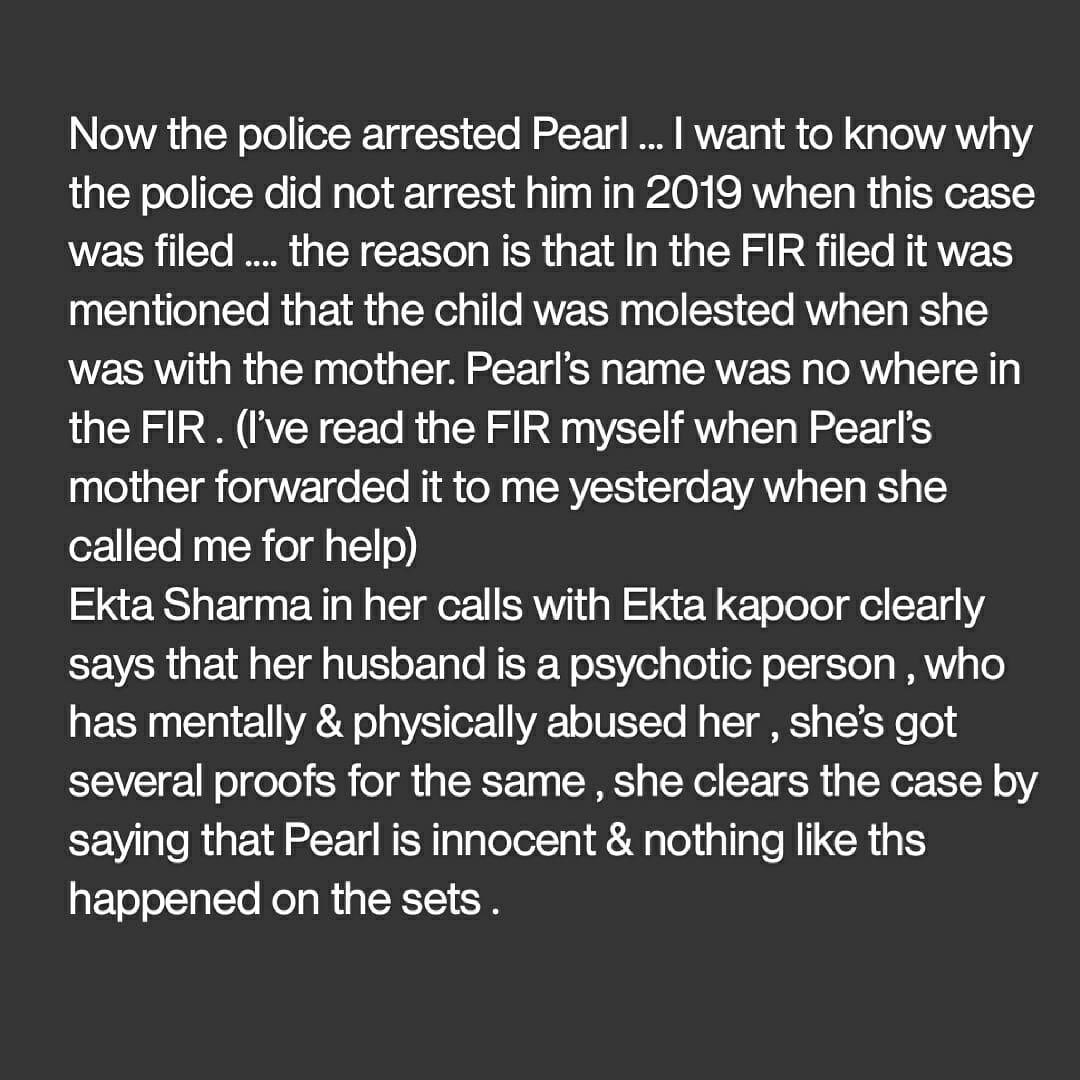 Divya then shared that the child’s maid, who used to go to the sets, has also said the same to the police that the child was happy and playing. However, what came later was more shocking. Divya revealed that the child’s father had abducted her after school and filed a case of physical abuse. She also states that even if there was no involvement of Pearl in the case, the child recognises the accused after two years and it is really sad that at such a tender age the child is being mentally played by her own father. 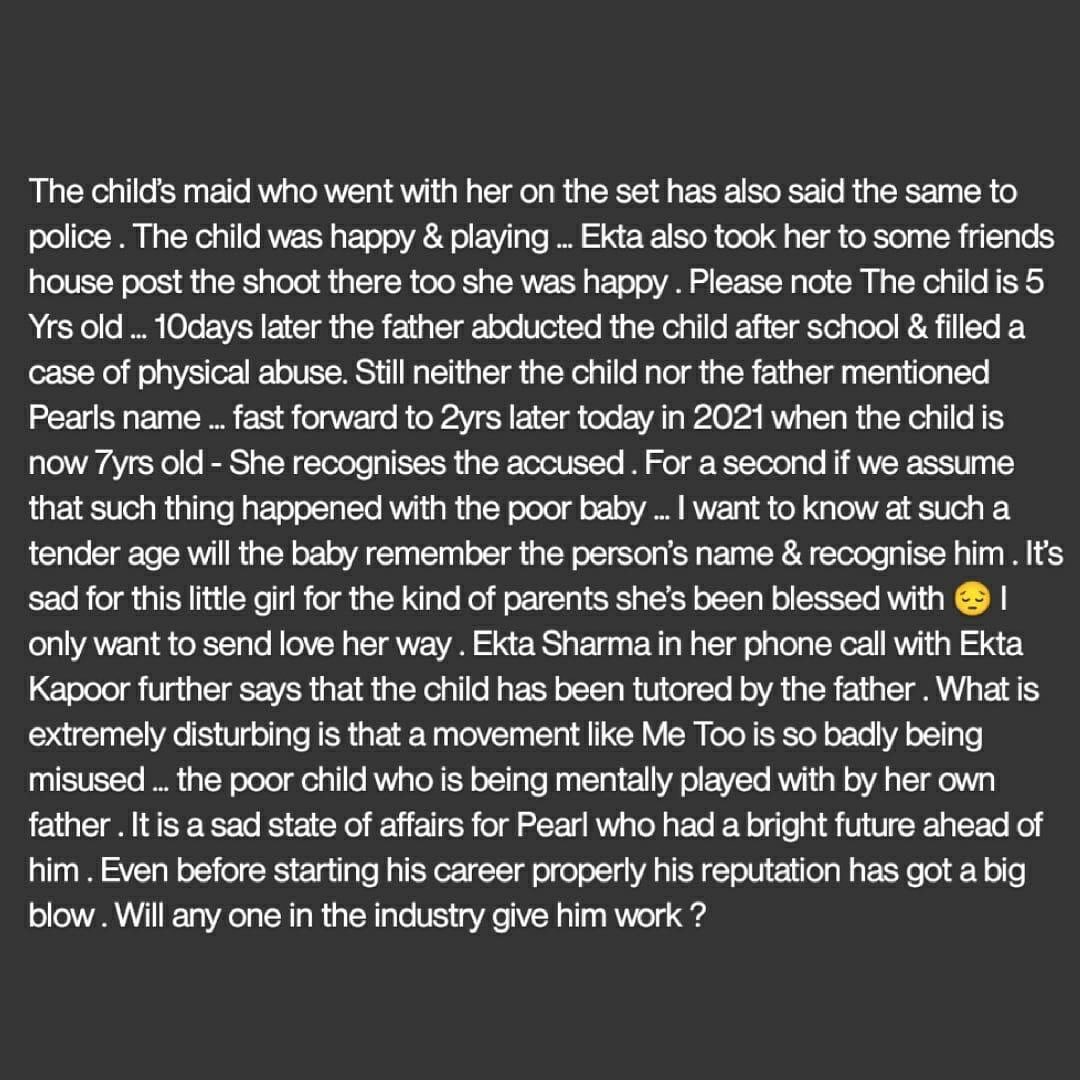 Divya further concluded that is shameful that people like Anil Donde are using their child for their gains and destroying other person’s career. She also stated that it is a shame on Ekta Sharma for not coming in the media and speaking the truth. She further requests everyone to come forward and support Pearl with #istandwithpearl and not let this case die down till the father and mother tell the truth. She also shares that the reason so many co-stars of Pearl are coming forward in his support is because they know him. She wrote, “He is a man of good moral values.”

Also Read: Dipika Kakar’s ‘Nanad’, Saba Pampers Her With A Yummy ‘Biryani’ As She Returns Home After 21 Days 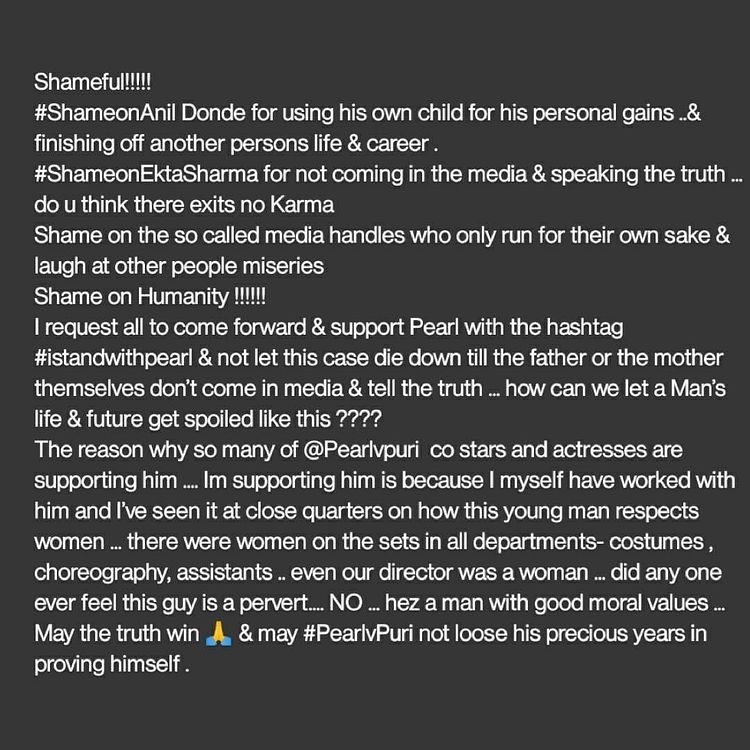 We hope that the truth comes out soon in this case and justice is served!


Divya Khosla Kumar Stands Beside Pearl V Puri, Reveals The Identity Of The Parents Of The Victim