Bollywood actress, Shilpa Shetty Kundra returned to the dance reality show, Super Dancer 4 a few days back as a judge alongside choreographer, Geeta Kapur and filmmaker, Anurag Basu. However, the actress was badly trolled on the internet for resuming work post her husband’s arrest in the pornographic case. Although, now her husband, Raj is back home, and his wife, Shilpa, has dropped a ‘recovering’ note from a book, on her social media handle.

For the unversed, the business tycoon, Raj Kundra was arrested for his alleged involvement in producing and publishing adult content films through various mobile applications. In fact, there were also allegations of him forcing people to work in these movies against their will. On September 24, 2021, Shilpa Shetty Kundra took to her Instagram stories and dropped a picture of a page from a book that is all about recovering from difficult times. After her husband, Raj Kundra returns home, no wonder the whole family is on the road to recovery after facing some severe damages in the last few weeks. The note written in the book can be read as “We’ve all heard that suffering makes us stronger that we learn from our difficulties. This may be true, but not in the simple way we might think. Difficult times don’t make us better; working through difficult times does. Suffering can force us to draw on strengths we never knew we had. Discovering these hidden strengths can then help us cope should difficult times come again. I hate bad times as much as anyone does, but I know I’m strong enough to get through them and recover from them.” 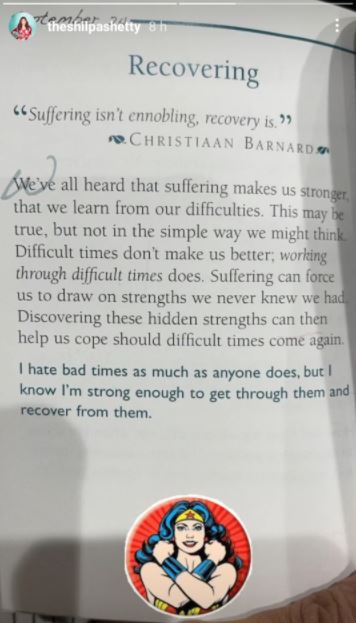 After dealing with one of the biggest storms of his life, Raj Kundra was granted bail on September 20, 2021. After paying a surety of Rs. 50,000, Raj had filed a fresh bail plea earlier this month after the Mumbai Police’s supplementary chargesheet had declared him an accused. The first pictures of Raj Kundra after getting out of jail got released from the Arthur jail. The paps snapped the London-based businessman, and he had looked weak and dishevelled. However, there was a sense of relief on his face as he was going to meet his family after more than two months.

After her husband, Raj Kundra’s bail, Shilpa Shetty Kundra had taken to her IG stories and had shared a positive note that explained how one could see the beautiful things in life only after surpassing the storms. The inspiring post by Roger Lee could be read as “Rainbows exist to prove that beautiful things can happen after a bad storm.” 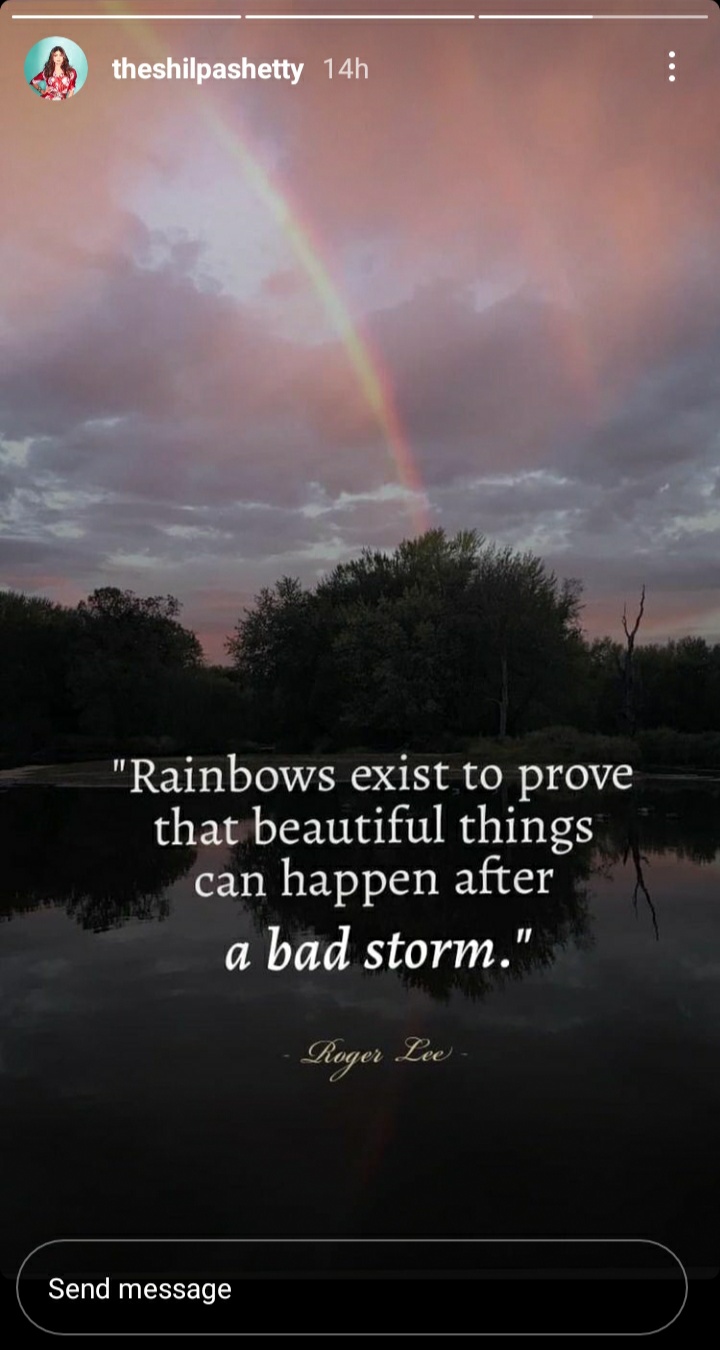 During Ganesh Chaturthi, Shilpa Shetty Kundra had shared a video from their aarti, and the actress could be seen doing Ganpati Bappa’s aarti with her son, Viaan. However, it was her caption that had indirectly hinted at her husband, Raj Kundra and his controversy. Alongside the video, she had written, “Harr saal ki tarah, iss saal bhi humaare GANNU RAJA saath hain, toh harr sankat ki maat hai. Keeping up with our yearly tradition, sending blessings your way. May Bappa’s grace help you overcome all your hurdles & obstacles!”

On the professional front, Shilpa Shetty Kundra was last seen in the film, Hungama 2.